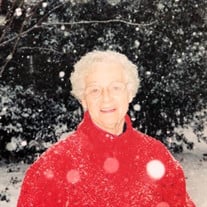 Anne Lopez Cabral, 97, of Kailua, passed away peacefully at home on Wednesday, March 6, 2019. She was surrounded by the love of her ohana in her final days. Anne was born in Honolulu to Manuel Joaquin Lopez and Alexandria Shandy Medeiros. The fourth of ten children, her only surviving sibling is her twin sister, Marie Dias, of Hawaii Kai. Anne attended Sacred Hearts Academy. Anne was a nurturer of young children throughout her life, taking care of many in her home. She was a dedicated homemaker, an excellent baker and enjoyed singing and traveling. Anne was married to Daniel Cabral from 1943 until his death in 1996. They had one child, Gwendolyn Anne Cabral Pane’e. Anne’s greatest pride and joy was her daughter. She was a devoted mother, championing Gwen throughout her education and early career as a teacher. She remained actively engaged as Gwen raised her own family on the mainland and was proud when Gwen returned to graduate school and began a second career as a librarian. Anne lived with Gwen on the mainland for 11 years after her husband passed away. Those were the happiest years of her life, as she was active in church, traveled extensively and enjoyed doting on the family dogs, Laci and Poppet. Upon losing Gwen to cancer in 2009, Anne returned home to Hawaii for the final ten years of her life. In addition to her twin sister, Anne is also survived by a granddaughter, Bryn Panee Burkhart, of Reading, MA; and a grandson, Cameron Panee. She has two great-grandchildren, Vann and Grey Burkhart, also of Reading, MA. Anne was a loving and supportive Nana to her grandchildren and great-grandchildren. They are most grateful for her influence on their spiritual faith and her enthusiastic encouragement of their education. Services will be on Wednesday, March 20 at St. Anthony’s Church in Kailua. Visitation will be from 8:45 a.m. – 9:30 a.m. A funeral mass will be held at 9:30 a.m., and a private burial will follow at Diamond Head Memorial Park. In lieu of flowers, the family requests that donations be made to St. Francis Hospice.

Anne Lopez Cabral, 97, of Kailua, passed away peacefully at home on Wednesday, March 6, 2019. She was surrounded by the love of her ohana in her final days. Anne was born in Honolulu to Manuel Joaquin Lopez and Alexandria Shandy Medeiros.... View Obituary & Service Information

The family of Anne Lopez Cabral created this Life Tributes page to make it easy to share your memories.

Anne Lopez Cabral, 97, of Kailua, passed away peacefully at home...