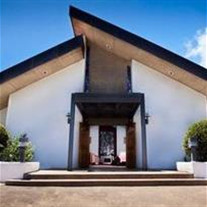 Annette Nalani Olds Ebinger, age 94, passed away peacefully on August 27, 2018 in Honolulu, Hawaii, surrounded by her family. She was born on February 25, 1924 in Honolulu to Clarence James Olds and Madeline Young. Her grandparents were James Olds, Jr. and Anastasia Nalani Olds and Charles and Lavaina Coster. In 1946, she married Albert J. Ebinger, a Captain in the Army Air Corps, who was a decorated fighter pilot, awarded the Silver Star for heroism in World War II. In 1950, they welcomed a son, Michael Allen. Her husband Albert predeceased her in 1962. Annette attended Punahou School for eight years and graduated in the Class of 1941. She attended the University of Hawaii until classes were closed after the December 7 attack on Pearl Harbor. As martial law came to Hawaii, she worked for the Army Corps of Engineers on the Punahou campus. She then joined Home Insurance and worked in the Claims Department. Annette was a hula dancer of grace and beauty and performed with Ray Andrade’s hula show at La Hula Rhumba Club on the slopes of Punchbowl. She also performed in California as a featured dancer with the troop. With the coming of Statehood to Hawaii and a burgeoning tourist industry, Annette joined Matson Navigation Company and opened sales desks at the Royal Hawaiian and Moana Hotels. In 1951, she went to work at the corporate office of Tradewind Tours, which later became Inter-Island Trade Wind Tours and International Travel Service in Waikiki. She enjoyed a successful career in travel and retired as the Vice President of Sales and Operations. The marketing and advertising skills she had so successfully employed in the tourist industry were then transferred to an affiliation dear to her heart: the sport of polo. Annette loved animals, and in particular horses and horseback riding. As her son Michael became an expert horseman at a young age, and eventually a polo player, she was his staunchest fan and a loyal supporter of the sport. She rarely missed the Sunday polo games at the Honolulu, Waimanalo, or Mokuleia Polo Fields on O’ahu where Michael’s team played. For many years, she designed the program for the polo seasons and garnered community support for the Waimanalo team. Along with life-long friends from the travel industry, she will be dearly missed by many polo fans who became her close friends, as well as players and their families she watched grow up over the years. Annette is survived by her son Michael Allen Ebinger and a sister Puna Olds Darval. In addition, she is survived by many nieces and nephews, grand-nieces and grand-nephews, and cousins. Two brothers, Charles M. Olds and James C. Olds predeceased her in 1930 and 1998, respectively. A Farewell Memorial Service will be held on Thursday, September 27 at Diamond Head Mortuary Chapel with Visitation from 9:00 to 10:30 with the Memorial Service following. Inurnment will be held at 12:30 at the Cemetery across from the Chapel. In lieu of flowers, donations can be made to the Hawaiian Humane Society, Habilitat, and/or Wounded Warriors Project.

Annette Nalani Olds Ebinger, age 94, passed away peacefully on August 27, 2018 in Honolulu, Hawaii, surrounded by her family. She was born on February 25, 1924 in Honolulu to Clarence James Olds and Madeline Young. Her grandparents were James... View Obituary & Service Information

The family of Annette Nalani Ebinger created this Life Tributes page to make it easy to share your memories.