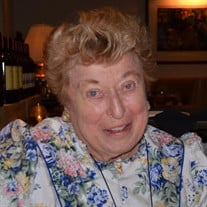 BETTY SCOTT MOIR, age 82, passed away with family by her side, on the evening of Wednesday, September 21, 2016. Betty was born July 14, 1934 in Columbus, Kansas. After completing nursing school, she ventured off to Pahala, Hawaii with her good friend, Wilma, to put her nursing skills into action. It was there that she met James “Jim” Sterling Moir Sr., of Hilo, Hawaii. Jim immediately knew what a catch Betty was and they were soon married on August 31, 1957. They relocated to Oahu, and started their family (James S. Moir Jr; John T. Moir; Heather L. Moir) shortly thereafter. With their entrepreneur spirits and desire to travel, in 1962, the entire family headed to the Philippines. After traveling the world, the Moir Family landed in Eugene, Oregon in 1970. After 15 happy years in the Northwest, Betty and Jim encompassed the Bay area, Honolulu, Guam and the West Pacific with their businesses. In 1996, and after the passing of her husband, Honolulu became Betty’s permanent home. She was a volunteer docent at Bishop Museum, Honolulu Museum of Art, and the First Circuit Court of Honolulu for many years. She also shared her passion for Japanese flower arranging with friends and family, and was a Sensei for Sogetsu. Water color painting, playing bridge, time ‘with her friends’ and sponsoring various gatherings at Oahu Country Club were amongst many of her favorite activities. She also authored two books: The Adventures of Snip in Oregon, in which she reminisced about Snip, the family dog, and her family. Betty is survived by her brother, William Howard Scott (Kathy) of Junction City, Kansas; three children, James Moir (Virgie) of Sacramento, CA; John Moir of Incline Village, Nevada; Heather Moir-Dangler (Breck) of Honolulu, HI. She is also survived by three grandchildren and three great-grandchildren A “Celebration of Life” service will be held Saturday, November 19, 2016 at 9:00 am at Central Union Church in the Atherton Chapel in Honolulu, Hawaii. Reception to follow. Flowers can be received by the church starting at 8:00 am. In lieu of flowers, a donation can be made in Betty’s name to Central Union Church or Honolulu Museum of Art.

BETTY SCOTT MOIR, age 82, passed away with family by her side, on the evening of Wednesday, September 21, 2016. Betty was born July 14, 1934 in Columbus, Kansas. After completing nursing school, she ventured off to Pahala, Hawaii with her... View Obituary & Service Information

The family of Betty Scott Moir created this Life Tributes page to make it easy to share your memories.

BETTY SCOTT MOIR, age 82, passed away with family by her side,...