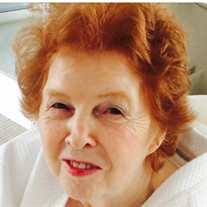 On Tuesday June 16th 2020, Bridget Madeline McCloskey-Cuthrell passed away at the age of 97. Bridget was born on April 21, 1923 in Coatbridge Scotland. She immigrated to America in 1928 with her mother, Rose O’Hagan, and her three sisters: Mary, Betty, and Rosie. Her Father, John McCloskey, awaited them in Philadelphia. Her sister Ellen was born soon after the family immigrated. Bridget worked at Stouffers Restaurant, and as a dance instructor. Her favorite dances were the Jitter Bug, the Fox Trot, Swing Dance, and the dance she invented herself, The Bridie. Bridget married Richard Bryan Cuthrell on July 16th, 1946, and they remained happily married for 65 years. Together they raised seven daughters and three sons. In 1997 Richard and Bridget moved to Hawaii where they joyfully resided in Waikiki until Richard passed in 2010. Bridget had an indomitable spirit. She wanted to try everything and go everywhere. And she did. Nothing was off limits. She was a wonderful, hilarious, storyteller and was always ready with a witty retort. She was boundlessly kind, cried as easily as she laughed, and had no trouble telling you off when you crossed a line. Her passion was movies and music and traveling -- her favorite singer was Frank Sinatra. She brimmed with love and even at the worst of times, it was a party to be near her. Bridget is survived by her children: Rosellen Blackard, Barbara, Robert, Jean, Elizabeth John, James, Ellen, and Lee Ryan Cuthrell; her daughter Kathy passed in 1996; her grandchildren: Brian Blackard, Amee Jones, Caroline O’Neil, Sarah Dezolt, Evan Kuzma, Willa and Josey Cuthrell-Tuttleman, Daniel, Christopher, and Luke Cuthrell; her great grandchildren: Jason and Aubree Jones, Charles and Amee Blackard, Camryn and Liam O’neil; Daughter in Law: Lynn Cuthrell; Son in Laws; Steven Tuttleman and Dino Cordova; her nieces: Sharon James, Joanie Conroy, Trisha Ramsey, Maryellen Martin-Lindsay, Roseanne and Brian Martin. She lived life to its absolute fullest and devoted her life to family. We will carry her in our hearts forever and ever and ever.

On Tuesday June 16th 2020, Bridget Madeline McCloskey-Cuthrell passed away at the age of 97. Bridget was born on April 21, 1923 in Coatbridge Scotland. She immigrated to America in 1928 with her mother, Rose O&#8217;Hagan, and her three sisters:... View Obituary & Service Information

The family of Bridget Cuthrell created this Life Tributes page to make it easy to share your memories.