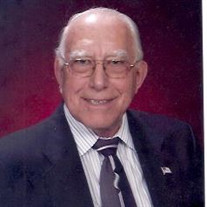 Burton Baldwin Barr, 88, passed away at Straub Hospital in Honolulu, Hawai’i on November 20, 2017. He was born to William W. Barr, Sr. and Elsie Sueltz-Barr in Harvey, North Dakota. Burton, also known as “Buzz” and “Burt”, grew up in Fessenden, ND but graduated from Cooperstown High School in 1947. He was president of his Senior class, on the football team, and achieved the status of an Eagle Scout. He then attended the North Dakota Agricultural College, later renamed North Dakota State University. He graduated with a Bachelor of Science in Applied Arts and Science and a Masters of Science in Agricultural Economics in 1953 and 1955, respectively. He was a member of the Sigma Phi Delta Fraternity. On March 18, 1951, Burton married Marion Lueck at Holy Cross Lutheran Church in Lidgerwood, North Dakota. Between 1952 and 1960, Burton and Marion were blessed with 4 daughters. In 1955, Burton joined the U.S. Department of Agriculture (USDA) which took him and his growing family around the country. They retired to Rehoboth Beach, Delaware in 1985, first moving into their vacation home in Angola-by-the-Bay before moving into a house in downtown Rehoboth Beach in 1987. Burton was an active member of Sussex Pines Golf Club in Georgetown, DE, the Elks Club in Cape Henlopen, DE, the Almas Shriners, American Legion and the Westminster Presbyterian Church in Rehoboth Beach. He was a ‘ham’ radio operator and belonged to the Association for Amateur Radio. For several years, he served as president of the local chapter of National Active and Retired Federal Employees Association (NARFE) in Rehoboth Beach, DE. After that, he was president of the Delaware State NARFE for four years. For several years, they also owned the Hawaiian Shop in Rehoboth Beach where they sold items they brought back from their Hawaii trips. Buzz was an active member of the Westminster Presbyterian Church in Rehoboth Beach, where their 50th Wedding Anniversary party was held. In June 2008, Buzz and Marion moved full time to Honolulu, Hawai’i. Buzz worked for 25 years as a volunteer for the various professional golf tournaments in Hawai’i. He golfed with the Elks “Spin-Offs” group a couple times a week at various courses around Oahu. He was an active member of the Hawai’i Yacht Club and a regular attendee of NARFE meetings at the Wailana Coffee Shop in Waikiki. He enjoyed playing bridge at the Senior Center at Central Union Church and with his Waikiki Yacht Club Men’s Group, and watching the Friday night yacht races at HYC with dinner & dancing & the Hilton Fireworks show. He attended monthly meetings at the Masons, Scottish Rites, Shriners, NARFE & Waikiki Neighborhood Board. He was a proud member of the Masonic Lodge in Dover, Kansas, the Almas Lodge in Washington, DC, and the Makiki Masonic Lodge in Honolulu. Most recently, he had enjoyed the Friday Mens’ Group at One Kalakaua. Burton also continued to attend the Ft. DeRussy Chapel and volunteered every Sunday. Burton is survived by his wife, Marion, daughters Leslie Vargas (Jorge) of Honolulu, HI, Roslyn Swick of Honolulu, HI, Wendy Barr (Ian Drewett) of Dataw Island, SC, Holly McGee (Scott) of Boulder, CO, grandson Jacob Swick (Jamie) of Winter Garden, FL, granddaughter Sarah Swick (Wael Qassim) of Jeddah, KSA, and 5 great grandchildren. He was preceded in death by his parents and his brother William Barr of Colorado Springs, CO. He will be remembered by his outgoing personality, love of God & Church, Family, golf and bridge, active participation in various community groups. He was a devoted husband to Marion for 66 years, and a loving father and grandfather and great-grandfather. A memorial service for Burton was held on Sunday December 17th at 10:30 am at the Fort DeRussy Chapel in Waikiki. Burial was on Monday December 18th at the Hawaii State Veterans Cemetery, Kaneohe, Hawaii.

The family of Burton Baldwin Barr created this Life Tributes page to make it easy to share your memories.

Burton Baldwin Barr, 88, passed away at Straub Hospital in Honolulu,...