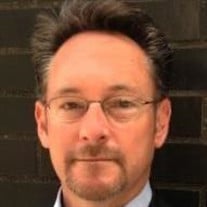 As much as we might try to plan the life we want, how blessed we might be to hold those plans in our fingertips loosely, making us available for change. Dan didn’t want to get married or have children because he thought it would interfere with his professional aspirations. His seemingly “solid” life plan shifted when he met the love of his life, Kerri - at work. When his “little love” Chloe was born, Dan became exceptionally skilled at balancing professional demands with fatherhood. Dan would take breaks from work just to go hold his daughter at daycare. Dan passed away March 13, 2021 on Oahu after a brief and painful battle with pancreatic cancer. During his 6-month battle, Dan never complained once. He endured with grace and dignity while Kerri lovingly provided care in the home until he was admitted to Islands Hospice where he received comforting and gentle care until his peaceful passing. Dan was born on March 8, 1965 and raised in Merced, California. He longed for a bigger life after high school, earning a Bachelor’s Degree in Business Administration/Accountancy from California State University, Sacramento, where he graduated magna cum laude. Dan went on to become a respected leader with over 25 years’ experience in strategic planning, finance and accounting in highly competitive and complex industries. He was both fierce and humble, his peers saying that Dan lessened their fears and apprehensions in difficult situations. Dan considered it an honor to serve on the Board of Directors of Sacred Hearts Academy, an all-girls college preparatory school in Honolulu, Hawaii. Beyond his wife and daughter, Dan loved racing, paddle boarding, swimming, Sunday family breakfast, hosting friends and family, camping, the San Francisco Giants, and the San Francisco 49ers. There was always racing on in the house - any kind of racing would do, but mostly NASCAR, Indy car, and MOTO GP. There are lots of fond memories camping with friends and family at Sonoma Raceway and in the mountains of Northern California. Dan shared a love of Star Wars, rock-n-roll, trucks, and Dads Kids Camp with his daughter. Dan adored his wife of 18 years, Kerri, and daughter, Chloe. Dan cherished his parents, William Bessey and Karen of Merced, California, sisters, JoLyn McMillan and RaeAnn Jimenez of Sacramento and Merced, California, respectively. Dan was uncle to 5 nieces and 4 nephews in Missouri, Louisiana, and California, always showing concern for their wellbeing and futures. He treasured his brother from another mother, Jim Vicari. Together they navigated life’s seasons of college, marriage, professional growth and raising kids. Their friendship melded the two families and extended families together. We will miss Dan’s thoughtfulness, his dancing eyes, sense of humor, and his persuasive abilities. He cared deeply for his friends and family and made every occasion special by his warm acts of kindness. His greatest passion was creating a beautiful life with his wife and daughter that began in Sacramento, California, and ended in Honolulu, Hawaii. He embraced the island with its aloha culture - he never wished to leave. Upon his request, his ashes will be scattered in the turquoise waters of the Pacific Ocean. There will be a private scattering ceremony on Oahu and a public celebration of Dan’s life in Sacramento, California, later in the year.

As much as we might try to plan the life we want, how blessed we might be to hold those plans in our fingertips loosely, making us available for change. Dan didn&#8217;t want to get married or have children because he thought it would interfere... View Obituary & Service Information

The family of Dan T. Bessey created this Life Tributes page to make it easy to share your memories.

As much as we might try to plan the life we want, how blessed...