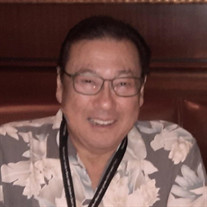 Dan “Chef Dan” Haruo Saito, of Salt Lake, Hawaii, passed away unexpectedly on June 11, 2021 at the age of 69. He was born in Los Angeles, California on March 22, 1952 and is survived by his loving wife, Christine, sons Evan and Kyle Saito, Avery Arakaki (stepson), and Chelsea Arakaki (stepdaughter), siblings Tina (Miro) Santoyo, Wayne (Sarah) Saito, niece Nicole, nephews Jacob, Julien, and several grandchildren and great grandchildren. Dan was predeceased by his parents George Saito and Mihoko Yoshimura Saito, brother Ron Saito, and sister Patti Deroeux. Dan attended UCLA majoring in business, then worked in the electronics field before pursuing his passion in the culinary field. After graduating from La Serre Culinary Academy in Paris, France, Dan apprenticed at Maxim’s of Paris. Throughout his culinary career, he worked with well-known chefs Jerimiah Tower, Wolfgang Puck, and Julian Serrano. He was the Executive Chef at the Manele Bay Resort on Lanai, Dunes at Maunalani on Maui, and opened the South Coast Winery in Temecula, California to name a few. However, Dan never lost sight of his commitment and contribution of his time to the Boy Scouts of America/Eagle Scouts or the catholic churches (St. Gregory the Great, Our Lady of Mount Carmel, St. Michael’s Catholic Parish) in San Diego, California. Volunteering was another of his lifelong passions. We will miss Dan’s compassionate heart and thoughtfulness, sense of humor, and his infinite warm acts of kindness. He was a great mentor to those who worked with him and a caring friend who would call just to say, “Hello”. He loved and cared deeply for his wife, family, and friends. Dan also loved life, cooking for others, golfing, and travel. We will miss his stories, jokes, laughter, and most especially, his food. You will forever be in our hearts. Private graveside services will be held for family members on Saturday, July 31, 2021 at 12:30p at Diamond Head Memorial Park.

The family of Dan Haruo Saito created this Life Tributes page to make it easy to share your memories.