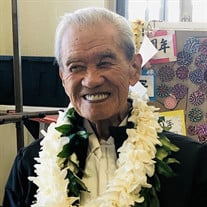 Daniel Sueo Miyamoto of Alewa Heights, Oahu passed away on Thursday, March 18th, 2021, at the age of 92. After several months of declining health, Daniel died at his home according to his wishes. Daniel was born in Honolulu on September 10, 1928, to father Tsunao Miyamoto and Lucy Ai Miyamoto of Kapahulu, Hawaii, the youngest of seven children. Daniel's interesting stories from his childhood memories growing up on Herbert Street in Kapahulu amused and informed generations, complete with colorful and questionable adventures and events. Daniel attended Jefferson Elementary where he says he first met his future wife Poki in Kindergarten, then Stevenson Intermediate, and entered Kamehameha School for Boys in the eighth grade, where he formed life-long friendships and excelled in sports (he says he held the State High Jump record until 1960) and JROTC as a Cadet Captain. Daniel graduated from Kamehameha in 1946 and entered the Army at the age of 18. He was an Army Clerk Typist but spent most of his time traveling the Pacific in the Army Special Services with the Army Track and Field, and Basketball teams. He was released from the Army in 1948 earning the World War II Victory Medal. After standing up his future wife on their first date, Daniel married the love of his life, Lilinoe “Poki” Pokipala, on October 16, 1948 and returned to Oahu to raise their family and continued to live in Alewa Heights for the remainder of their lives. Daniel embarked on a career in civil service with the U.S. Post Office and Navy Department. He soon found his experience, personality, and understanding of logistics to be a perfect fit in the U.S. Coast Guard—and so began a lifelong career. Daniel ended his career in 1985 with the 14th Coast Guard District Comptroller Division as a Supervisory Contract Specialist. Daniel was an active member of the Veterans of Foreign Wars, Kanikapila Golf Club, the Elks Club, the Kamehameha Alumni Association Class of 46, as well as the Community of Christ Church. When he was not traveling with Poki on their trips to Las Vegas, he could be found at the Pali Golf Course 19th hole and/or attending sporting events with his grandchildren, or cooking for his family and outdrinking his nephews and nieces. Daniel and Poki were married for 71 years until Poki passed away in 2019. He will be sadly missed by his daughters Leilani Kaeo (Dean) and Jeanne Oliveira (Bruce); Daughter in-law Terry Miyamoto, grandchildren Jason Kabutan (Jessie), Grant Miyamoto (Heather), Jennifer Echeverria (Mario), Marlene Kaeo (Shaynen), Nathan Kaeo (Rachel), Cean Oliveira, Liko Oliveira (Alyssa), and C’era Oliveira-Norris (Darian); and 13 great-grandchildren; and an overabundance of nieces and nephews. Daniel was preceded in death by his parents, his sister Hana Calario, his brothers Henry, Alfred, Ernest, Paul, Edmund, his wife Poki, and his sons Brian and Wayne. A Celebration of Life is planned for Saturday, June 5, 2021. The “walkthrough” visitation will be at 11 am to 12:30 pm at the Diamond Head Mortuary on 535 18th Avenue, Honolulu, Hawaii. The memorial service will follow immediately at 12:30 pm., viewable from the outdoor lanai or virtually in the comfort of your home. Please see the Diamond Head Mortuary Online Obituaries for more information: diamondheadmortuary.net. The Graveside service will promptly begin at 2:00. All are invited to attend. Aloha attire. Monetary gifts shall be donated to the many charitable organizations he so willingly gave to honor Daniel’s lifelong commitment to family and community. Please click on link below to view the service: http://webcast.funeralvue.com/events/viewer/54601/hash:86BE8FF3498B7058

Daniel Sueo Miyamoto of Alewa Heights, Oahu passed away on Thursday, March 18th, 2021, at the age of 92. After several months of declining health, Daniel died at his home according to his wishes. Daniel was born in Honolulu on September 10,... View Obituary & Service Information

The family of Daniel Miyamoto created this Life Tributes page to make it easy to share your memories.