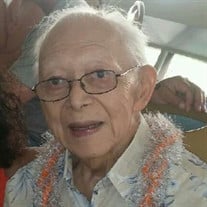 David Cheung 93, of Honolulu, passed away on December 12, 2015 in Honolulu. He was born on February 27, 1922 in Riverside, California. David was a retired Plumbing Designer and a very active member of the Jehovah Witness. He is survived by... View Obituary & Service Information

The family of David Cheung created this Life Tributes page to make it easy to share your memories.