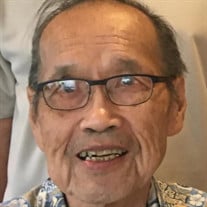 85, of Honolulu, passed away August 6, 2020, at home surrounded by family. Donald was born October 5, 1934, in Honolulu, the son of late John and Edith Jay. He was the oldest of 4 siblings. On March 21, 1969, he married Elaine C. Chow, who passed away August 3, 2016. Donald graduated from McKinley High School in 1952; and he graduated from University Of Hawai’i in 1962 with a degree in Civil Engineering. He served in the U.S. Marines in the mid-1950s, with an honorable discharge as an E-3 Lance Corporal in 1962. After his discharge, he pursued a career as a Civil Engineer with the Army Corps of Engineers for 35 years; then worked for the City & County of Honolulu until retiring in 1999. He did volunteer work for Hawai’i Meals on Wheels. In his retirement years, he enjoyed traveling with Elaine, practicing Tai Chi, tending to his orchids and playing bridge. He was an avid Sudoku puzzler and voracious reader. Donald was an easy-going man, who spoke when necessary, shared his wisdom when asked, and had a gentle, loving smile for all. Donald married Elaine on March 21, 1969, in Pasadena, California. He is survived by his children: Julianne (Jonathan) Hughes, Jennifer (Aron) Oakes, and Jeffrey (Maja Jozanovic) Jay; his grandchildren: Wynne Oakes, Diana Hughes, and Tristan Hughes; his siblings: Sandra Shiroma, Jerrold Jay, and Randall Jay; and his nieces: Suzanne Billington and Stephanie Shiroma. Private services. Celebration of life pending. Condolences: [email protected]

The family of Donald Jay created this Life Tributes page to make it easy to share your memories.