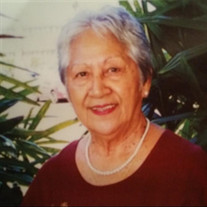 Dorothy Blanche Leilani Hewlett Irvine 14 Dec 1930 – 27 Jul 2019 Dorothy Blanche Leilani Hewlett Irvine Born 14 December 1930 in Kalihi Kai (Honolulu), the second child to Ella Margaret Ah You & John Hope Hewlett, Sr. She was educated at: Jane S. Parke – Pre-school, Kindergarten Kalihi-Kai Elementary Kalakaua Intermediate Farrington High School – Class of ’48 The Governors are the BEST!!! While at Farrington High School, she was a member of their Swimming Team and even got to try out for the US Olympic swim team one year. A favorite pastime for her and her friends was swimming at the Natatorium. As a military wife, she accompanied her husband Art to Ingrandes, France; Ft.Bliss, TX; and Ft. Sill, OK She was an active member of the NCO Wives’ Club in Ingrades, France; and served one year as their club President. Her extended ohana included the Richmond and Maile Puahala family from when Art was stationed in France; the Henry and Anna Salis family (she knew Henry from school days’ time, and reconnected with him and his family at Ft. Sill, OK; the Frank and Lisa Waipa family from when Art was at Ft. Sill, OK. Additionally, Herbert (Buddy) and May Lau family she knew forever because she and May were high school classmates. When she returned home to Hawaii, she returned to working with the Army and Air Force Exchange Service: - Warehouse marker; sales person; customer service clerk; branch manager at MAC Terminal; branch manager Military Clothing and Sales store at Hickam Air Force Base. - She retired in 1995, with 30 years of service. She was an active member of Pearl Harbor Hawaiian Civic Club. She enjoyed her yearly Las Vegas trips with her sister, and her brothers and their spouses; after the brothers passed away, she looked forward to the girls going (sister Haunani, sister-in-law Flo, and her); they had so much fun and were always, planning for their next trip as soon as they got back. She would visit her grandsons in Washington state almost every year since they moved there in 1992; sometimes in the summer, sometimes over the Christmas holiday season, staying 1-3 months at a time. Her grandsons are now grown up and her great-grandchildren Jesse and Isabella made sure she was comfortable when she visited. She said she had the best nurse at home in her son-in-law Wayne, so patient, great bed-side manner, his proprietary in taking care of her. He missed his calling; we are going to send him to Nurse’s Aide School, he did such a beautiful job taking care of her. She was Dottie to all the men in her life (dad and brothers),Dot Irvine to her co-workers, Leilani to mom and family friends, And Teddy to her high school friends. She was preceded in death by her husband Arthur Irvine Sr.; her son, Arthur Irvine Jr.; her parents; her 3 brothers; and 2 sisters. She is survived by her sister Haunani, her sister-in-law Florence, her son Wendell,and daughters Stephanie, Sandra, Lanette, and Ronette. She was a kind and gentle woman, with lots of love and aloha for her family and friends. She is our mom and she will always be in our hearts in all that we do. We love you mom! Celebration of Life service will be held on August 16, 2019 (Friday) at Diamond Head Mortuary Chapel. Visitation at 10:30 a.m., Services at 11:00 a.m., and Burial at 12:30 p.m.

The family of Dorothy Blanche Leilani Hewlett Irvine created this Life Tributes page to make it easy to share your memories.