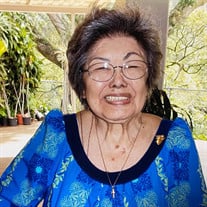 Helen S. Lee, 88, born and raised in Honolulu, was taken from us suddenly on November 27, 2020. Just a child when Pearl Harbor was bombed during WWII, the war years were challenging for a child of Japanese ancestry. However, she persevered, excelled in English and writing, and was accepted to acclaimed Roosevelt High School, which was at that time an “English-Standard” school. Her teachers encouraged her to continue on to the university but, as was often the case in Japanese families at that time, those opportunities were reserved for the male children. Helen was married twice and had two children from her first marriage. In the late 1950s, when divorce was rare, Helen courageously started a new life and devoted herself to raising two children on her own. She insisted on sending her children to Catholic schools, and she often worked three jobs in order to do so. She tended bar, waited tables, and worked as a bookkeeper, and she also managed to convince the Notre Dame de Namur nuns to help as well, by arguing that it was their duty to help educate her children. In spite of everything else she had to juggle, she also managed to attend the University of Hawaii for a year. In 1971, she became a radio dispatcher for the Honolulu Police Department, which marked the beginning of a life change for her. Through an HPD friend, she met the love of her life, Frederick Lee, whom she married in 1974. They enriched each other’s lives and were inseparable for the next 38 years, until Fred’s passing in 2012. Fred nicknamed Helen “Fierce Mother,” and Helen’s children became Fred’s children. Eventually, they also became proud grandparents. They traveled to California to see Ryan and Paul’s baseball and soccer games, and they never missed a school event, hula performance, or track meet of Shoshana’s in Hawaii. More recently, Helen eagerly welcomed her first great-granddaughter, Lilinoe, with boundless love and even a special song. Helen’s warm, welcoming ways also made her “Grandma” to many of her grandchildren’s friends, both in Hawaii and on the Mainland. In fact, she was also known as the “Christmas Tree Grandma” because she kept a Christmas tree up and fully decorated all year round. Helen was a woman of strong faith and she was very involved in her parish church, St. Pius X Church in Manoa. She was among the first to volunteer for any activity or ministry and did it cheerfully and with great enthusiasm. Her above and beyond spirit of voluntarism resulted in her being awarded the statewide honor of “Island Treasure” for St. Pius in 2007. In addition to working at HPD, grandparenting, and volunteering, Helen enjoyed playing games of any kind and traveling. From riding a mule down the slopes of Kalaupapa, to traveling to Europe for the first time in 1992 and getting to celebrate her 60th birthday in Paris, to hiking in Yosemite, to playing the one-armed bandit in Las Vegas – Helen approached life with zest and a sense of adventure. After losing Fred in 2012, Helen’s life revolved around home and family. She is survived by her two children, Charlene Moran (Marshall) and Richard Robello, three grandchildren, Ryan Moran (Maile Arvin), Paul Moran (Alayna), and Shoshana Robello (Nick Margull) and one great-grandchild, Lilinoe Arvin-Moran. She is also survived by her sister, Alice Abalos and many nieces and nephews The family would also like to gratefully acknowledge many caregivers who lovingly assisted with her care in recent years: Karen, Nancy, EvahLyn, Roxan, Marie, and Lourdes – Helen’s last years were made immeasurably better by their kindness. Helen’s life was a full one – full of love, kindness, caring, generosity, fun, music, and enthusiasm. She was an angel to so many on this earth, and now she is our angel in heaven. Because of Covid 19, memorial services are being postponed. Please log onto the Diamond Head Mortuary Guestbook for information about a future memorial, when we can safely gather to celebrate Helen’s life and legacy of kindness and generosity. https://www.diamondheadmortuary.net/obituaries/

Helen S. Lee, 88, born and raised in Honolulu, was taken from us suddenly on November 27, 2020. Just a child when Pearl Harbor was bombed during WWII, the war years were challenging for a child of Japanese ancestry. However, she persevered,... View Obituary & Service Information

The family of Helen S Lee created this Life Tributes page to make it easy to share your memories.