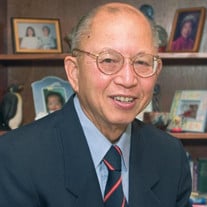 Henry Lorrin Lau passed away July 17, 2021. Known to most as “Lorrin” and to Harvard classmates as “Buz Lau” he was born to Col. Henry S. Lau and Helen Lau in 1932. Educated at Punahou High School, Harvard College cum laude, Johns Hopkins School of Medicine, M.D., and the Johns Hopkins Bloomberg School of Public Health, MPH. Internship at Johns Hopkins Hospital and residency at Georgetown Hospital in OB-GYN. Granted two-year NIH post-doctoral fellowship at Johns Hopkins. Served on faculty at The JHU Schools of Medicine and Public Health. With Ralph Heinicke at the Dole Research Laboratory, he researched uses for the otherwise discarded roots of pineapple plants leading to discoveries in endo- and exopeptidases enzyme debridement to reduce scars in third-degree burns and clarification of beer, so now all beer is clear. At Johns Hopkins, did medical research to study infertility, miscarriage and gender identity and invented some of the first affordable pregnancy tests, tests for alpha-fetoprotein (AFP), and tests for sex steroid hormones and progesterone. He was a contributing author in The Johns Hopkins Atlas of Human Functional Anatomy with renown illustrator Leon Schlossberg. After 32 years at Harvard and Hopkins, he returned to private practice in Honolulu in OB-GYN for 34 years. In 1990 he helped to open St. Francis Medical Center-West Hospital and delivered its first baby. In his retirement, he cared for patients at the Waikiki Health Center. Dr. Lau believed the greatest privilege any human could have is to care for and to take care of others. His priorities were to save lives, to bring peace and comfort, and to make a difference. With his friend, inventor Stan Mason, he encouraged family and friends to invent three new things every day, three ways to make the world a better place. In 2000 he joined the Howard A. Kelly Gynecologic and Obstetric Society, in 2006 he received Hawaii Health Foundation’s Kenneth F. Brown Hawaii Health Award for having made a significant impact on the health of Hawaii and the world, in 2014 he was knighted by the Orthodox Order of St. John Russian Priory, and in 2016 he was elected a member of the Johns Hopkins School of Public Health Alpha Chapter of the Delta Omega Public Health Honorary Society. He is survived by his wife Maureen Lau of the Isle of Wight, five children and two step-children, 12 grandchildren, two sisters (Evelyn “Babs” Char and Karen Kee), and his first wife Rhoda. In lieu of flowers, donations can be made to the Vegetarian Society of Hawaii for the Henry Lorrin Lau Lectureship where guests will present original research rather than opinions and review of the literature: https://www.vsh.org/drlau/. A memorial mass will be held on Saturday, August 14, 2021 at the Cathedral Basilica of Our Lady of Peace 10 am, visitation with family and friends 9 am. Paid parking available at Century Square, Kukui Plaza, or Capital Place. Funeral service and burial Monday, August 16, 2021 at Diamond Head Memorial Park Chapel, visitation 10 am, program at 11 am. Due to Covid protocols, seating limited.

The family of Henry Lorrin Lau created this Life Tributes page to make it easy to share your memories.