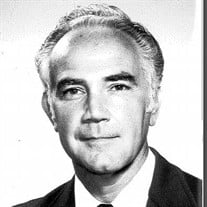 Joseph Paul Bova,88, of Hawaii Kai passed away peacefully on Sunday, September 9, 2018. He is survived by his wife, Patrica; two brothers, Ted (June) of Groton, MA and Richard (Lois) of South Yarmouth, MA; sons, Anthony (Mary) of Rockport, MA and Clint (Jenny); two grandchildren, Joseph Charles Bova and Madeline Lockhart Bova of Columbus, Ohio. Joe was born in Boston, Massachusetts. He attended Boston College High School, Severn School in Severna Park, MD. and graduated from M.I.T. with a degree in Mechanical Engineering. He played Ice Hockey and Lacrosse all through his education and was 1954 Athlete of the Year at M.I.T. He came to Hawaii with the U.S. Air Force. Soon after his service, he joined Castle and Cooke Ltd. When he retired he was Vice President of the Diversified Division. In 1985, he joined Inchcape bhd., in Southeast Asia going first to Kota Kinabalu, Sabah, East Malaysia, where he was Managing Director of B-TRAK, their outlet for trucks and heavy equipment, and then to Singapore for five years where he was Managing Director of Inchcape's Diversified Products. Joe loved Hawaii and was an avid sailor, SCUBA diver and fisherman. Inurnment service will be held on Wednesday, October 3 at 10:30 a.m. at National Cemetery of the Pacific, Punchbowl.

The family of Joseph Paul Bova created this Life Tributes page to make it easy to share your memories.

Joseph Paul Bova,88, of Hawaii Kai passed away peacefully on...