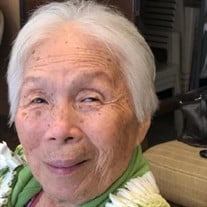 Mrs. Julia (Juliette) Hee Lee, daughter of Annie Mau Hee and Hung Chow Hee, was born in Honolulu, Hawai’i, on May 24, 1924. After meeting Herbert Man Sin Lee on a blind date through an introduction by friends, Leatrice and Joe Pang, they immediately fell in love and married. Prior to her marriage, Julia attended Sacred Hearts Academy, where she graduated with honors, class of 1942. Her Catholic faith remained very important to her throughout her life. She was a member of St. Augustine Church for many years. She and Herbert were devoted parents to their five children – Gordon (Joanne) Lee, Patrick (Dianna) Lee, Marilyn (Paul) Thayer, David (Wendy) Lee, and Barbara (Jim) Ainge. In fact, she was an at-home mom until all five children were enrolled in school, caring for them and even meeting them each day to walk them home from school. Julia was very loving to her family, dedicated to her children's education and, along with Herbert, provided for each to earn a college degree. She valued education, though she did not have the opportunity herself to go beyond her high school degree. After high school, Julia worked to help support not only herself, but also help put her two brothers, Joe and Jensen, through college. Later, Julia worked for Uncle Henry Mau, as his assistant in his accounting firm; and after her children were a little older, she was employed at the Department of Defense Military Entrance and Processing Station in Waikiki, working on one of the first computer database management systems. Julia loved traveling and often was excited to share the trips she and Herbert took, voyaging from the glaciers of Alaska and the Eiffel Tower in Paris, to the California Hotel in Las Vegas and the Forbidden City in Beijing. She enjoyed spending time with friends and family, including "camping" in cabins at Punalu’u. Julia loved sewing and taught her daughters how to sew at a young age, and was proud to make the clothes for her five children. She enjoyed playing games, which proved very helpful as she was very successful at playing BINGO at the Maunalani Nursing Center; where she would win stuffed animals for her great-granddaughters, Casey and Taylor. Julia was proud of her cultural heritage, and taught her children to enjoy the diverse foods and traditions of Hawai’i. She especially loved Hawaiian music, and often got “chicken skin” listening to her favorite local artists. Julia passed away on March 15, 2020 at the age of 95. A Celebration of Life is scheduled at a later date. She is survived by her five children, as well as her five grandchildren (Daniel Thayer, Maile Thayer, Sara-Anne Hostoffer, Stanton Sunaoka and Scott Sunaoka); and four great-grandchildren (Viola Hostoffer, Casey Sunaoka, Taylor Sunaoka, and Micah Sunaoka).

The family of Julia (Juliette) Hee Lee created this Life Tributes page to make it easy to share your memories.