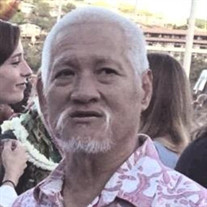 Leland Mew Shing Pang (Age 65) November 8, 1955 - May 8, 2021 (Written By His Younger Brother Jerald) Leland was a caring and deep thinking soul. He once risked his own life to protect me from shards of broken glass, falling from a ceiling fixture, during a pillow-fight, gone-wrong. I could have easy lost an eye and/or my life, that day. You see Leland shielded me from a very pointed piece, headed for my eye socket and instead pierced into his shoulder. He always kept his eyes on us youngsters in the neighborhood, from blowing our hand off. Leland Mew Shing Pang was born on November 8, 1955, in Honolulu, Oahu, Hawaii, to Annie Len How (Akona) Pang and Roland Yuk Min Pang, at Saint Francis Hospital. He was the fourth of five children, with 7/8 Chinese and 1/8 Hawaiian (from our Mother). Leland, attended Liholiho Elementary, Kaimuki Intermediate, and Graduated from Kaimuki High School. He went on to earn an Associate of Arts Degree, in Liberal Arts, from Kapiolani Community College. In his younger years, Leland was an active member of the Boy Scouts Troop 5, which was adopted by Queen Liliuokalani and proclaimed by Her Majesty as "The Queen's Own Troop". He attained the rank of "Life Scout", the Second Highest rank only to Eagle Scout. He was also elected into the prestigious "Order of the Arrow", Scouting's Honor Society and a Senior Patrol Leader in the troop. Leland was also a player on Kaimuki High's "Bulldogs" Volleyball Team. He was Honored as the "Most Outstanding Player of the Year, in his Senior year on the team. Leland was an avid Ukulele Player and Lover of Hawaiian Music. He was a Big Fan of Gabby Pahinui, Peter Moon, Herb Ohta (San), and Eddie Kamae, just to name a few. His other musical influences were The Beach Boy, The Four Seasons, and Jay and the Americans, as well as music of the 20's through the 80's. Leland's interest in the Ukulele and music, started during the many Ohana Mele Kalikimaka gatherings when we had kanikapila. He would cockroach our Father's Ukulele and the mold was casted. Leland started taking lessons from the Kahala YMCA and the Hawaiian Music Program at Kaimuki High. He was also privileged to be a student of Ohta-San, until Leland could no longer learn anymore from him. He also learned Guitar and other instruments. Leland was a bachelor and never married. But, he was bless with many Nieces and Nephews, that he helped to raise and care for, from Keiki to Adulthood. He also cared for our Maternal Grandmother, our Mother and our Father, during their Golden Years. He recently, was helping care for Auntie Ella, this past year. For several years before the pandemic, Leland was known to frequent Kaimuki Shopping Center and Kahala Mall, where he would play his Ukuleles, as well as teach, shared, and kanikapila with "The Gang". Leland was Vaccinated and Did Not Get COVID-19. Leland is survived by Sisters and Brothers: Francis H. Pang, Diana May N. N. Pang Deabler, Henrietta M. L. Samori, and Jerald M. S. Pang. Also by Nieces and Nephews: Adrian A. Pang, Alexander K. K. Samori, Martin H. K. Deabler, Shelby Ann H. Samori, and Roanne J. K. Deabler. Also, many Relatives and Musical Friends. We Will All Truly Miss Him.

Leland Mew Shing Pang (Age 65) November 8, 1955 - May 8, 2021 (Written By His Younger Brother Jerald) Leland was a caring and deep thinking soul. He once risked his own life to protect me from shards of broken glass, falling from a ceiling... View Obituary & Service Information

The family of Leland Mew Shing Pang created this Life Tributes page to make it easy to share your memories.