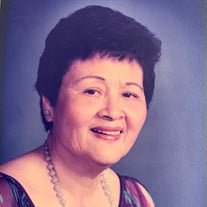 Lena Quon Hou Wong transitioned peacefully in her sleep on September 23, 2020. She had just celebrated her 96th birthday. She was born on September 4, 1924, in Honolulu, Hawaii, and was the seventh of nine children. Her mother, Len Dai Ho was born on Oahu. Her father, See Lung Lock, was born in Canton, China, traveling to Hawaii as a young boy. Lena was educated at Kaahumanu Elementary, Washington Intermediate, and McKinley High School. During her early school years, she was given the English name “Lena” by her teachers, who found it easier than her Chinese name. After graduating from high school, Lena attended the University of Hawaii for two years then Armstrong College in Berkeley, California, for the next two years earning a business degree. She returned to Honolulu to help her father with accounting at his local retail stores. In 1952, Lena married Albert S. L. Wong, who was setting up his dental practice in downtown Honolulu. They had four sons and Lena was very involved with their sports, music, hobbies, embracing their friends, and volunteering for many Iolani School activities, where they all attended. In addition, she was taking care of her elderly parents who lived with them and were both disabled. Lena was a wonderful cook and prepared meals lovingly for her family at home and at the office. Lena was dedicated to working at the dental practice, helping her husband, and later, her three sons and grandson. Many of the patients became lifelong friends, and many of her friends became lifelong patients. Lena and Albert enjoyed 57 years of marriage together before Albert’s passing. Despite losing most of her vision and hearing during the last few years of her life, she persevered through these limitations and continued to help at the dental office and feed her family whenever the opportunity arose. She continued to interact socially and work at the office up to the pandemic, at which time it was recommended that she stay at home. When asked about the secret to longevity, Lena said it was to keep on exercising your mind and body. In her younger adult life, she enjoyed bowling and tennis, and later, did all of her own housework. She was a longtime member and past director of the Wong Leong Doo Benevolent Society of Hawaii, of which her father was a Founder. An avid reader to the day of her passing, she used a magnifying glass to make it possible for her to read, do some accounting, and continue to learn. She is survived by her four sons, Allen (Cheryl), Gary, Bryan (Charlene), Lenbert (Betsey), and her eight grandchildren, Berton, Jelene, Alden, Alexsi, Makena, Kailen, Lansing, and Kekoa. Although she will be missed, Lena leaves a legacy of love, hard work, dedication to family, and joy. We will always remember her smiles, upbeat demeanor, sharp mind, and wisdom. The family is grateful for all of the loving support and kind friendship from all of Lena’s extended family members, friends, and dental patients throughout the years. She was truly blessed with a full, happy, and long life! Private services were held. Donations may be made to 'Iolani School in memory of Lena Q. H. Wong. Please click link below to view the funeral services. http://webcast.funeralrecording.com/events/viewer/40443/hash:A1D290C77973A6D1

Lena Quon Hou Wong transitioned peacefully in her sleep on September 23, 2020. She had just celebrated her 96th birthday. She was born on September 4, 1924, in Honolulu, Hawaii, and was the seventh of nine children. Her mother, Len Dai Ho was... View Obituary & Service Information

The family of Lena Quon Hou Wong created this Life Tributes page to make it easy to share your memories.