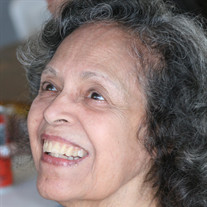 Leonetta Keolaokalani Osorio Kinard on May 15, 2018 at age of 92 was called to Heaven by a multitude of angels along with those who preceded her including her children Baby Art, Renata, her parents Emil and Eliza Osorio, brother Emil Jr, sister Lynnette Kaneao Lovell, husband Jim, sister in law Clara, and son in law Alan Parlin. Born and raised in Hilo, Hawaiʻi, she graduated from Hilo High School in 1943. Always willing to share her aloha with the world, she worked in various capacities for Hawaiian Airlines and found herself working for the Army Corps of Engineers in Tripoli, Libya. She returned to Hawaiʻi two years later married with the intent of starting a family. An accomplished hula dancer and soprano in her own right, she was a USO peformer, toured the mainland with Ray Kinney & his Royal Hawaiian Revue, and joined the legendary Aloha Airlines sales team to promote Hawaiʻi as a travel destination across North America. While living in Honolulu she gave birth to Baby Art and Renata. Not too long after the death of her first child, Baby Art, She eventually became a single parent. She refused the advice to place Renata in Waimano Home as she was expected to only live a month. Defiantly, mother and daughter moved back to Hilo to ensure her daughter would live a full life regardless of her life expectancy. Her commitment to her family took priority over her wonderlust. Upon her return to Hilo she served as a manager of the Hilo Hukilau Hotel. She eventually met Jim Kinard and was married in her parentʻs home. Together with brother Elroy built the Nalei Hotel of which she was the general manager. Jim adopted Renata and couple became parents to Leolinda and hanai to Berta Kaili. Renata passed away in her arms at age 7. She served as both the Aloha Week and Merrie Monarch Queen in the same year. Upon the sale of the hotel, once again Jim and Leonetta started another venture JK & LK Auto Paints and Supplies serving Hilo for almost 30 years. Her life in Hilo was filled with family, friends, singing in both the Haili and Berean Bible Church choirs, hanging with the craft ladies from Kamana and being Auntie to all of Leolindaʻs friends. Upon the passing of her beloved Jim, she moved to Oahu to be Puna to her grandchildren Alan “Sunny” and Christina “Cissyʻ Parlin, the transplanted Osorios on Oahu, and all those who came into her life in Pauoa. She will be remembered for her aloha, thoughtfulness, and voice – both in music and in championing the marginalized. She leaves behind the following ʻohana: daughter, Leolinda Parlin, grandchildren Sunny & Cissy, hanai Berta Kaili, brother Elroy (Delene) Osorio and sister in law Lani Osorio. She was an Auntie before she was a parent and considers her nieces and nephews part of her immediate family who include: Bebe & Ah Lun Yung, Tom & Jennifer Osorio, Jon & Mary Osorio, Dave & Sweetie Osorio, Matt Osorio & Melissa Tasaki, Ecko & Carla Osorio, Christy & Regan Mizuguchi, Lani Osorio, Eric Knight, Juno & Christie Knight, David & Patti Knight, Ekolu & Lei Osorio, Raymond & Gladys Grillot, Don & Tamera Kimi, Kim Kimi & Mike Sohriakoff, Jr., Rolande Paleka-Kennedy, and all their children and grandchildren. She also considers as family: Eileen Lota, June Mizota, Robin Makapagal, Robin Raco, Rolanda Reese, the Raco Babies & Naihehau Hawanawanaimakua Kalama and their families. Friends may call at the Dodo Mortuary chapel on Saturday, June 23, 2018 from 9:00 AM to 11:00 AM, where a Memorial Service will be held at 11:00 AM, followed by urn committal services at the Homelani Memorial Park. The family requests that aloha attire be worn to the services.

Leonetta Keolaokalani Osorio Kinard on May 15, 2018 at age of 92 was called to Heaven by a multitude of angels along with those who preceded her including her children Baby Art, Renata, her parents Emil and Eliza Osorio, brother Emil Jr, sister... View Obituary & Service Information

The family of Leonetta Keolaokalani Osorio Kinard created this Life Tributes page to make it easy to share your memories.