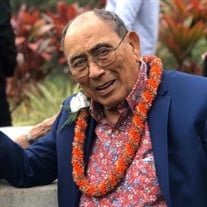 LOUIS ADAM LOPEZ SR., 98, left the arms of his loving wife on May 14, 2021. Born in Honolulu, Oahu, Territory of Hawaii, Louis graduated from St. Louis College in 1941. Due to the unexpected attack on the Pearl Harbor Naval Base on December 7, 1941, Louie gave up his dream of attending Dayton University in Ohio to pursue a medical profession, and entered the shipfitter apprentice program with the United States Pearl Harbor Naval Station. In 1943, he enlisted in the U.S. Army and was stationed in Kyoto, Japan. While in the military, he married Beverly Agnes Camacho on November 16, 1946. Their marriage was eventually, blessed with three children, Alvina, Louis Jr., and Francis. In June of 1947, he received an honorable discharge from the Army and returned to the employment of the Pearl Harbor Naval Base where he eventually retired after 30 years of service. After his retirement from federal employment, he went to work for the State of Hawaii’s Department of Planning and Economic Development. He readily admits that his most memorable time of his 10 years with the State department was the year that he resided in New York City promoting Hawaii’s exotic floral products to national and international markets. From early adulthood, Louie developed a deep respect and admiration for Father Joseph Damien Deveuster who dedicated and devoted his life to care for the spiritual and physical needs of victims of leprosy that were separated from their families from 1866 to 1969 on the remote Kalaupapa peninsula on Moloka`i. In 1959, the Governor of the State of Hawaii appointed Louie to be the chair of the State’s Statuary Hall Commission responsible for the selection of two of Hawaii’s most illustrious and honorary citizens to have their replicas placed in the National Statuary Hall Collection in Washington D.C. His unyielding dedication to Father Joseph Damien Deveuster and King Kamehameha I resulted in the successful unveiling of bronze statues for both honorees, on April 15, 1969, in the presence of renowned State, National, and International leaders. Since then, Father Damien has been canonized by the Catholic church and has received the honorary title of Saint Joseph Damien. King Kamehameha I statue can currently be found in the U.S. Capitol Visitors Center, while Saint Damien’s statue is located in the Hall of Columns. Louie, a devout Catholic, believed in addressing life’s trials through prayer and an unwavering faith in the benevolence of the Heavenly Father, and His son, Jesus Christ. He called on his faith to overcome his grief after the devastating losses of his grandson, Theodore J.P. on January 6, 1984, his oldest son, Louis Jr. on March 3, 1996, his loving wife, Beverly, on August 21, 1996, and his great-grandson, Tyler Lien-Lopez, on July 15, 1999. For years, Louie enjoyed the game of golf with family and friends. In one of the golf groups that he occasionally played with, he met his new love, Jean Yoshimura, whom he married on November 07, 1998. They spent a loving and blissful life together, working on the Lopez family land in Waimanalo, playing golf, and travelling to distant places. His resolute faith now guides him on his journey to the loving fold of our Heavenly Father and our Lord, Jesus Christ and into the welcoming arms of his celestial family that preceded him. His warm, loving, comforting presence and distinctive sense of humor will be deeply missed by his surviving wife of 22 years, Jean Yoshimura-Lopez; his combined children; Alvina, Francis, Layne (Yoshimura) and Lance (Yoshimura); his daughters-in-law, Teresa and Patricia Lopez; his grand-children and in-laws, Jennifer Lopez, Jason and Noelani Lopez, Sean and Linh Lopez, Natasha and Jared Dayton, Jayme and Jay Pang, and his 10 great-grandchildren.

LOUIS ADAM LOPEZ SR., 98, left the arms of his loving wife on May 14, 2021. Born in Honolulu, Oahu, Territory of Hawaii, Louis graduated from St. Louis College in 1941. Due to the unexpected attack on the Pearl Harbor Naval Base on December... View Obituary & Service Information

The family of Louis Adam Lopez created this Life Tributes page to make it easy to share your memories.