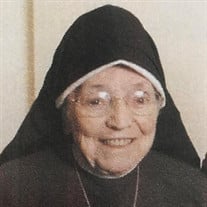 Sister Maria Rosario Daley died on October 18th, 2018 in Honolulu, Hawaii. She was 95 years old and had been a Maryknoll Sister for 73 years. She was born in Albany, New York on February 1st, 1923 to Margaret (Harpinger) Daley and John H. Daley; she was baptized as Regina Anne. She had three sisters, Veronica, Rose and Joan and one brother, Rev. James D. Daley. Her parents and sister Joan have predeceased her. In 1941, Regina graduated from Holy Names Academy in Albany, New York. She then entered the Maryknoll Sisters Novitiate in Maryknoll, New York from St. Thomas Parish in Delmar, New York (Albany Diocese) on September 6th, 1945. At her Reception, she received the religious name Sister Maria Rosario. She made her First Profession of Vows on March 7th, 1951 in Honolulu, Hawaii. From 1941-1945, Sister Maria Rosario studied at the College of St. Rose in Albany, New York where she earned a Bachelor of Arts Degree in Latin and Mathematics. In 1967, she earned a Master's Degree in Mathematics from Boston College and in 1974 she earned her second Master's degree in Theology at the Maryknoll Seminary, in Maryknoll, New York. Sister Maria Rosario then studied computer science in 1977 at Pace University in Westchester County, New York. In 1948, Sister Maria Rosario was assigned to the Hawaii Islands, for the next 17 years she taught in the Maryknoll high school in Punahou on Oahu, at St. Ann’s High School in Kaneihe also on Oahu and at St. Anthony’s School in Wailuku on Maui. In 1967, she returned to Maryknoll, New York to serve as a member of the faculty at Mary Rogers College where she taught Mathematics and worked in the Admissions Office until 1973. She was then assigned to the Treasury Department at the Maryknoll Sisters Center to serve as Coordinator of Lay Employee Personnel and the Office of Immigration from 1974-1985. In 1985, Sister Maria Rosario returned to Hawaii, where she served as Diocesan Computer Consultant, taught a Scripture course and worked with Eucharistic Ministers at Sacred Heart Parish in Punahou until 1989. In the years that followed, she remained in Hawaii and worked at Maryknoll High School, was Lay Personnel Director and Computer Consultant for the Diocese of Honolulu. From 1997-2003, Sister Maria Rosario continued to do part time clerical work in the Maryknoll High School Guidance Office and served as sexton, sacristan and Eucharistic Minister for the Manoa-Punahou Catholic Community. She retired in 2014, but remained an active volunteer. A Viewing at 9:00 a.m. and Mass of the Resurrection at 10:15 a.m. will be held for Sister Maria Rosario on Saturday, December 1st, 2018 at Sacred Heart Church - Wilder Avenue. Burial will be at 2:00 p.m. at Diamond Head Memorial Park Cemetery.

Sister Maria Rosario Daley died on October 18th, 2018 in Honolulu, Hawaii. She was 95 years old and had been a Maryknoll Sister for 73 years. She was born in Albany, New York on February 1st, 1923 to Margaret (Harpinger) Daley and John H.... View Obituary & Service Information

The family of Sister Maria Rosario Daley created this Life Tributes page to make it easy to share your memories.