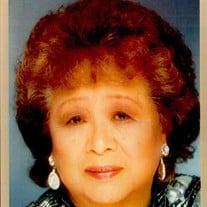 Mary Clarida Acorda Visaya was born on February 21, 1925 on the sugar cane plantation of Kealia, Kawaihau on the island of Kauai. She was raised by her loving parents Marciana Suguitan Rafanan (Ma) and Andres Rafanan (Pa). She was blessed to... View Obituary & Service Information

The family of Mary Acorda Visaya created this Life Tributes page to make it easy to share your memories.