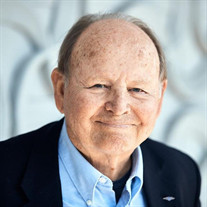 Our beloved Phillip Buck Olsen, 90, of Honolulu, passed away peacefully March 18, 2021, after battling pneumonia and despite surviving prostate cancer for over three decades. His final days at Straub Medical Center were filled with his charismatic humor, wide smiles and a twinkle in his vibrant blue eyes. Phil was born in Duluth, Minnesota, February 28th, 1931, to Norwegian immigrants, the late Henry Jomar Olsen and Hjordis Elfrida Buck Olsen. He spent much of his youth in Upstate New York, particularly in Speculator in the Adirondacks. There he met his life-long and dearest friend, Paul Wilbur, who introduced Phil to wilderness camping and hunting and influenced him to seek higher education. Phil was a proud 1953 graduate of Wesleyan University, majoring in English, then a 1958 graduate of UCLA, where he earned a Master’s Degree in Journalism. In his 90 years, Phil had a wide variety of occupations and lived in myriad places, including California, Connecticut, Germany, Hawaii, Nebraska, New York and the Philippines. He started working at age 12, was a United States Air Force officer pilot, then in public relations for Western Airlines, then responded to President Kennedy’s historic challenge, “Ask not what your country can do for you – ask what you can do for your country,” by joining, in 1962, one of the first groups of Peace Corps volunteers to go to the Philippines. Phil and his first wife, Frances Ann, spent four years in the Philippines, where he taught school, then became a Volunteer Leader for 240 volunteers, then in 1967 became Director of Peace Corps training in Hilo, Hawaii, training 3,000 volunteers to serve in Asia and the Pacific. He shared his dedication to service and passion for the Peace Corps with his step-daughter Malia, who followed in his footsteps as a second-generation Peace Corps Volunteer more than 30 years later. In the 50 years he lived in Hawaii, Phil was Associate Dean at the University of Hawaii from 1973 to 1985, then resumed flying after being recruited as Chief Corporate Pilot for Alexander & Baldwin. He flew between Hawaii and the U.S. mainland, with occasional trips to Europe. “Ten happy years of flying wonderful airplanes,” proclaimed Phil. During this time, he met and married his second wife, Minnie, and became step-father to her daughter Malia. Flying was Phil’s lifelong passion. He was a certified Federal Administration Association instrument flight instructor for single and multiengine land and seaplanes, and was an Air Transport Pilot. Over the years, Phil trained and mentored numerous students on various aircraft, logging more than 12,000 flight hours on the BAE-125, CE-500, HS-125 and FA-119C aircraft. In 1956, Phil was presented with the Estella della Solidarieta (Order of the Star of Italian Solidarity) by Italy. In 2011, he was awarded the Wright Brothers Master Pilot Award. From 1972 to 1979, he served as Commander of the Civil Air Patrol Aloha State Search and Rescue Squadron. Phil enjoyed numerous activities, including downhill and cross country skiing, fishing (particularly fly fishing), hiking, meditating, running marathons, swimming and traveling to such favorite destinations as Norway. With his 2019 visit to Antarctica, he happily completed visiting all seven continents. His drive and work ethic, together with his kindness, empathy, generosity, keen sense of humor, love of life, penchant for telling stories and delight in mentoring, led to the many life-long friendships he treasured. He was a longtime active member of the Church of the Crossroads in Honolulu. Over the years, he was an active member of the Aircraft Owners and Pilots Association, the Elks Club, the Foreign Affairs Association, the Honolulu Symphony Guild with his third wife Gail Hudson, the Quiet Birdmen, the Returned Peace Corps Volunteers Group of Hawaii, and served as Vice President of the Honolulu Marathon. After his prostate cancer diagnosis in 1993, Phil became a forceful advocate for prostate health. In 2004, he was a founding member and served on the Board of Directors of the National Alliance of State Prostate Cancer Coalitions (NASPCC). In 2006, he founded the Hawaii Prostate Cancer Coalition, a volunteer corporation dedicated to making prostate cancer a health priority, and was its first president. Phil was elected Vice President of NASPCC for 2011-2012 and in 2019 was the first recipient of their James West Spirit Award for his lifetime of spirited advocacy for prostate cancer health. Furthermore, in 2013 another national organization, the Prostate Cancer Research Institute (PCRI), awarded Phil the prestigious Harry Pinchot Award for “making a difference in the fight against prostate cancer.” In addition to his parents, Phil was preceded in death by his beloved wife of 19 years, Gail Moffat Hudson, and dear brother-in-law Bud Borrell. Phil is survived by his sister, Karen Borrell of Cerritos, CA; brother, Ric Olsen (Beverly) of Santa Clara, CA; step-daughter, Malia Boggs (David Chandler) of Honolulu and grandchildren, Maia and Kai Chandler; brother-in-law, John Moffat (Karen Lerner) of Bellingham, WA; cousins Steinar Halvorsen (Stina), of Sandland, Norway and other Norwegian cousins; nephews Erik Olsen (Larissa Chadwick) of Blacksburg, VA, Jake Olsen (Brandy) of Palo Alto, CA and Phillip Hannes (Marilyn) of San Diego, CA; nieces Erika Olsen Hannes of San Francisco, Hjordis Seda Carmein and Natalia Olsen Lopez of Cerritos; grand nieces and nephews. The family is deeply grateful to Melissa Totherow, Phil’s executive assistant and dear friend who, over the last seven years, was like a daughter to Phil. Due to the pandemic, the family will announce a celebration of Phil’s life later this year. Online condolences, stories, and photos may be shared on the obituary page of the Diamond Head Mortuary website https://www.diamondheadmortuary.net/obituaries/. Donations in Phil's memory may be made to Hawaii Public Radio (https://members.hawaiipublicradio.org/), Honolulu Symphony (https://www.myhso.org/), or Prostate Cancer Research Institute (https://pcri.org/). As Phil would say in his goodbyes to his cherished family and friends, "Love and hugs" and "Happy Landings!"

Our beloved Phillip Buck Olsen, 90, of Honolulu, passed away peacefully March 18, 2021, after battling pneumonia and despite surviving prostate cancer for over three decades. His final days at Straub Medical Center were filled with his charismatic... View Obituary & Service Information

The family of Phillip B. Olsen created this Life Tributes page to make it easy to share your memories.

Our beloved Phillip Buck Olsen, 90, of Honolulu, passed away...