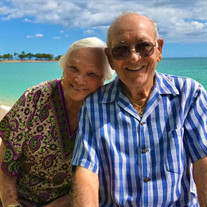 After 65 years of marriage, the extraordinary love story of high school sweethearts Colonel Harold Kazuto Okita, Jr., 89, and Rowena Kekua Okita, 87, both of Kailua, Oahu, continues into the afterlife. God called his humble servant, Harold, to join his celestial team on January 19th, 2022. Our dad must have tapped God on the shoulder and whispered for Rowena to be his eternal angel because, just 16 days after his passing, on February 4, 2022, our beautiful mother joined him in heaven. If you ever ran into our dad and asked, “Eh, howzit, Hal?”, his inevitable response would be, “Perfect! Anything less would be unacceptable!” He was the ultimate optimist. Our dad loved all sports - but especially baseball and golf - and used sports analogies as the backdrop for life: “Winners never quit and quitters never win!” “Be neat, complete, and on time”. “You miss 100% of the shots you don’t take!” Even at age 89 - just two months shy of his 90th birthdate, March 29, 1932 - he could rattle off any rule or statistic. He was sharp. And sometimes when he reminisced, you could actually imagine his 12-year-old self playing third base or shortstop at the old Honolulu Stadium in Mo’iliili near where he grew up … dreaming of someday hitting a home run for his beloved New York Yankees. His skill as a baseball player earned him scholarships to Saint Louis College, now high school (Class of 1950), and the University of Dayton (1954). As for golf, our dad would be the first to tell you he managed courses far better than he played them. Fourteen was his best-ever handicap, but his real ace was his leadership skill. He ran the U.S. Army Golf Association in Hawaii and its many recreational facilities for a dozen years and then took the helm at Mid-Pacific Country Club for the next eight years. He had so much passion for the game - founding the Hawaii State Golf Association, sitting on boards and committees for the U.S. Golf Association and the Hawaii Junior Golf Association, and becoming Executive Director for the Aloha Section of the PGA. Dad taught us that - no matter a person’s station in life - everyone deserves to be treated with respect and kindness. Perhaps he learned that during his 27 years of service with the U.S. Army - honorably serving across the country, around the world, and at his favorite posting, with the 82nd Airborne Division in Ft. Bragg, NC. He was truly the epitome of All-American and would tell you that serving his country was his cherished vocation. His love for the USA was unparalleled. Our father was a workhorse, not a showhorse - gladly rolling up his sleeves in service to the Lord and to others. The same goes for our beloved mother, Rowena. She was born February 17, 1934 and raised along the slopes of Diamond Head in Kapahulu. She’d sometimes reminisce about a simpler time when Waikiki was her playground, and she and her older brothers would make their own fun by climbing trees and going to the beach. They’d save their allowance to buy shave ice and mango seeds and go to the movies for 9 cents! From early on, our mother was dedicated to a life of service. Over the decades, she volunteered at the Red Cross, delivered meals and newspapers to patients at Castle hospital in Kailua, and for 36 years, comforted dying patients at their bedside at Saint Francis Hospice. Her selflessness earned her “Volunteer of the Year” at Hospice Hawaii. Our mother was simply the kindest, most generous, thoughtful person you’d ever meet. She’d often slip a $10 Starbucks giftcard to friends, strangers, the valet, a nurse, whomever … for no other reason than to make them feel special. That commitment to others stemmed from her Catholic faith and her education at Saint Francis Convent school in Manoa (Class of 1952) and the College of Saint Rose in Albany, NY (Class of 1956??). She even considered becoming a nun. Which brings us back to the enduring love story. Her calling turned out to be our dad. As family legend goes, he needed a prom date so his friend introduced him to two pretty girls from St. Francis … one in a fancy dress, one in jeans. He liked the tomboy in jeans. Mom and Dad were a couple from then on. Her devotion to our dad was found in life’s little details: cooked meals, laundry cleaned, errands done. And when he was diagnosed with cancer in 2019, our then 85-year-old mother became his primary caretaker. She never, ever complained. Her dedication and unfailing, unconditional love extended to her four children. Our dad liked to say, “Mom never became a Mother Superior, but she was always a superior mother!” So, the final, earthly chapter of this tender tale ends with their life-long romance extending to the afterlife. Two people who just couldn’t bear to be apart. And as the poem goes, “They slipped the surly bonds of earth … to touch the face of God.” Together. Forever. We love you so much, Mom & Dad. Take care of each other in heaven. Aloha. A hui hou … until we meet again. ❤ Your loving children, Harolynn & Tony Wiley, Michael & Lynn Okita, Elissa & John Kuhr, Teri Okita & Dale Allen; your grandchildren, Lauren Malone, Christopher & Tara Wiley, Ryan & Shillelagh Kuhr, Kameron Wiley, Brandon Kuhr, Matthew Kuhr, Thomas Allen, Erin Allen; and great-grandchildren Miles Melton, Cora & Tessa Wiley, Kekoa Kuhr (?), and Papaw’s little buddy, Monte. We’re Celebrating the Lives of Harold & Rowena Okita Friday, April 22, 2022 St. John Vianney Catholic Church in Kailua Visitation: 9:15 a.m.; Eulogy & Mass: 9:40 a.m. Diamond Head Mortuary Tribute Memorial: 12 noon Diamond Head Memorial Park military burial: 1:00 p.m. The Tribute Memorial Service at Diamond Head Mortuary will be broadcast live and can be viewed at the following link: http://webcast.funeralvue.com/events/viewer/71707/hash:4A6E034FF8922D50

The family of Rowena Okita created this Life Tributes page to make it easy to share your memories.

After 65 years of marriage, the extraordinary love story of high...