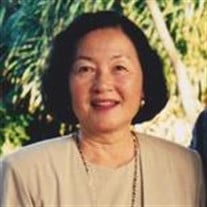 Ruby Nobuko Tsuruma, age 94, passed away on Feb. 18, 2020. She is survived by her older sister Ruth Kajikawa, younger sister Betty Shiota, son Patrick Tsuruma (Karen), daughter Janice Raney (Robert), seven step-grandchildren, thirteen step-great-grandchildren, nieces and nephews in Honolulu, California, Colorado, New Mexico and Washington. Ruby was born in Honolulu in 1925, and grew up in the McCully area with her parents, brother, and three sisters. Her father was a carpenter and a fisherman, and her mother was a picture bride. On Dec. 7, 1941, Ruby was sixteen and remembered vividly that she was ironing that Sunday morning when their house on the corner of King and McCully was bombed and burned down. The family survived and stayed at the Kapahulu Japanese Language School until they found a new home. Ruby graduated from McKinley High School and liked to mention that Daniel Inouye was a classmate. Ruby met her future husband, Bill, at a dance. After what must have been an exciting courtship during which Ruby threw her engagement ring at Bill more than once, they got married just after her 21st birthday in 1946. They stayed married for 64 years. Ruby began her career as a secretary at the Thayer Piano Company in downtown Honolulu, and then went on to work for the National Marine Fisheries Service, the Fish and Wildlife Service, and the U.S. Soil Conservation Service as office manager and executive secretary. After retirement, she worked part-time at the University of Hawaii-Manoa Summer Session for fun money. Ruby and Bill enjoyed bowling, ballroom dancing, learning to play the piano, cruises, and most of all, Las Vegas, where they went several times a year. While they always hoped to win big, they considered their “contributions” to the casinos to be well worth all the fun they had. They also loved entertaining family and friends, especially Bill’s best friends from high school, T.J. Pang and Stanley Kimura and their families, who we consider our calabash relatives. After Bill passed away in 2010, Ruby remained in their home. She loved her house and her yard and would spend hours weeding her lawn into her late 80s. When she could no longer live alone, she moved to Manoa Senior Care, where she was very happy. She said she was living the life of Riley, not having to cook, clean, or lift a finger. Even up to her last weeks, she declared she could live to be 100, and was cracking jokes with her nurses. Her family will be forever grateful for the wonderful nurses and staff who took such good care of her. Ruby wasn’t a religious person, but she lived like a true Christian. She was so thoughtful and enjoyed helping others. Her heart was big and generous. She was a loving daughter, sister, wife, mother, aunt, grandmother, great-grandmother, and friend. Some of her last words of advice were: “Take good care of each other. Be good to each other.” We love you, Mom. You will always be in our hearts. Private service. The family requests no koden or flowers.

The family of Ruby Nobuko Tsuruma created this Life Tributes page to make it easy to share your memories.