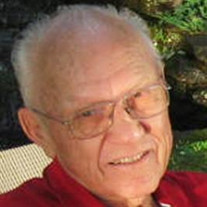 Rudolph M. “Rudy” Krause August 18, 1925 ~ May 7, 2016 Rudy Krause, age 90, passed away in his home in Honolulu on May 7, 2016 shortly after sunset. He is survived and will be greatly missed by his loving wife Shirley, daughter Dawn Krause, son Randy Krause (Vimi), sisters Carole Neely (Carlton), Dorothy Smith, Eunice Barry (Edward), Shirley Jarratt, and Joyce McCoy (Kenneth). He is predeceased by brother James Krause and sisters Lois Williams, Eleanore Burbrink, and Alice Krause. Rudy was born in Kenosha, Wisconsin on August 18, 1925 to the late Rudolph and Olga Krause. He was the first-born son of 10 siblings. The family moved to Vallejo, CA in 1941. It was there that he met his one and only true love, the former Shirley Trammell. They were married in 1948. He began working at age 16 as an apprentice machinist at Mare Island Naval Shipyard. During World War II, Rudy served in the U.S. Army Air Corps as a pilot and airplane mechanic. His long career with the U.S. Civil Service took him and his family to many places across the country and around the world. His last assignment took him to Hawai‘i in 1976, where he retired as Chief Planner and Estimator at Pearl Harbor Naval Shipyard in 1981. After retirement, he moved on to successful careers as an engineering consultant and built and remodeled homes. Rudy’s greatest joy, other than his family, was golf. He began playing in his 20s and continued almost until the time of his death. He began volunteering for the PGA Hawaiian Open (now Sony Open) in 1983 and retired as Division Chair of the Operations II Committee in 2010. For 27 years he devoted time, expertise and energy to the tournament and he loved every minute of it. Always good-natured and outgoing, Rudy made friends wherever he went. He was truly interested in other people and treated everyone he met with courtesy and respect. He will be greatly missed by many. In keeping with Rudy’s wishes, no memorial service is planned. Should you wish to make a gift in memory of Rudy Krause, contributions may be sent to Islands Hospice, 1301 Young Street, Ste. 300, Honolulu, HI 96814 or online at: http://www.islandshospice.com/Pages/IslandsHospice/Donations

The family of Rudolph M. "Rudy" Krause created this Life Tributes page to make it easy to share your memories.