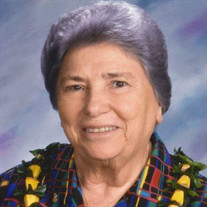 Sister Stephen Marie Serrao, OSF (Marie) went home to God on July 6, 2021, at the Plaza in Kaneohe after a brief illness. Sister was born to the late Joseph and Gloria Serrao on November 29, 1929, in Hilo, Hawaii. Sister attended St. Joseph Elementary and High School in Hilo until the tenth grade, transferred to Hilo High School then to St. Francis Convent School in Honolulu from which she graduated in 1947. She entered the Sisters of the Third Franciscan Order, Syracuse, New York, on September 29, 1947 and was invested in March 1948. Sister made her temporary Profession of Vows in 1950, her final Profession in 1953, and in 2018 celebrated her 70th Jubilee as a Franciscan. Sister received a Bachelor of Science degree from Chaminade in 1962. For over 50 years she was in education and ministered in Albany, North Utica, and Fairmont in New York, and in Venice, Florida. In Hawaii, Sister taught at Sacred Heart School, Lahaina, St. Francis Convent School in Honolulu, and spent a total of 25 years at St. Joseph School in Hilo. Leaving education, she then ministered at St. Francis Medical Center-West in Ewa Beach, as the coordinator for volunteers. Since 2009, she spent her remaining years in community service, and prayer ministry at St. Francis Convent in Manoa. Serrao Lane in Kaumana on the big island, was named after Sister Stephen Marie’s grandfather, Jose Serrao, who came to Hawaii to work in the sugar cane fields. He later moved to Hilo, grew the madeira grapes and in 1903, started his own distillery under the name of Serrao Wine and Liquor Co. The street is now called I’iwipolina Street. Everyone who knew Sister remembers her great sense of humor, happy go lucky attitude, and that she was the life of the party. She was always available for her students and remembered them; former students and colleagues will attest to her excellence as an English teacher, and her excellent spelling ability. In addition to her deceased parents, Sister was predeceased by her sisters Matilda, Hilda and brother Joseph. Sister is survived by several nieces and nephews, grand and great grand nieces, nephews, and cousins and the Sisters of St. Francis of the Neumann Communities. Memorial Mass for Sister Stephen Marie will be on July 16, 2021 at 10:00 am at St. Ann’s Church in Kaneohe. Burial will be on July 19, 2021 at Diamond Head Cemetery at 9:00am. In lieu of flowers, donations may be made to the Sisters of St. Francis, 2102 Liliha Street. Honolulu HI 96817.

The family of Sister Stephen Marie Serrao created this Life Tributes page to make it easy to share your memories.