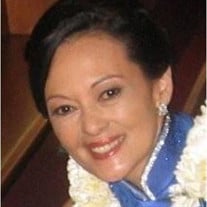 Tania Marie Lui-Kwan (73) passed away, held by her two sons, on May 1, 2021. Tania will be remembered for her passion for her family and friends, unrelenting spirit, liberal instincts, and infectious laugh. Born on January 17, 1948 to Peter Anthony Gomez and Jean Sun Cho Kim Gomez, Tania was the second of four children. Tania was proud of her Hawaiian, Korean, Portuguese, and Chinese heritage, and made anyone who questioned that pride in her heritage regret that they said anything in the first place. Tania’s inner strength and beauty became apparent on the outside in 1967, when she competed and placed as the runner-up in the Miss Hawai'i Contest. She graduated from Sacred Hearts Academy in Honolulu and attended the University of Hawai'i at Hilo and Rutgers University. She served on the boards of directors of various organizations, including the Hilo Chapter of the League of Women Voters, Project Keiki, and the Building Industry Association of Hawai'i. Tania was a successful businesswoman and entrepreneur. In the mid-1980s, she worked in the Direct Investment Division of HonFed and HonVest Corp. In 1986, Tania joined Grubb & Ellis as a commercial real estate agent in Honolulu. She was recognized, in 1987 and 1988, as the Top Sales & Leasing Agent for the company’s office and retail divisions and then again, in 1990, as Top Salesperson in the company’s investment division. In 1998, Tania established and became president of Benefits Advisory Group, which became one of the most successful independent health insurance brokerage firms in the State of Hawai'i. Tania travelled the world throughout her life, visiting Austria, China, Germany, Iran, Thailand, and cities across the U.S. She enjoyed cooking for the people she loved and always made enough to feed twice as many people as she had in the house. Tania was tremendously proud of her family, including her sons Kalama Lui-Kwan and Keola Lui-Kwan, daughter-in-law Euna Kim, sisters Eva Martine and Brenda Gomez, brother Peter Gomez, nieces Malia Karlinsky, Jean Peterson, Kai Corby, and Malia Corby, nephews David Martine, Peter Gomez, Michael Corby, and Daniel Corby, and many grandnieces and grandnephews who adored her. During her later years, Tania’s greatest joy came from her granddaughters Rana Lui-Kwan and Nani Lui-Kwan and grandson Kai Lui-Kwan. A pandemic-appropriate celebration of Tania’s life will be held on Sunday, May 23, at Diamond Head Memorial Park. First, at 9:30 a.m., Tania’s family will broadcast a private service, which guests may access remotely. Call Tania’s sons, or Diamond Head Memorial, for the website. Second, although in-person seating will be limited to invited family members, all guests may walk through the chapel for viewing between 11:00 and 12:00 p.m. Third, all guests will be welcomed at the burial, which will begin at 12:30 p.m. Face masks are required. Aloha attire is encouraged.

Tania Marie Lui-Kwan (73) passed away, held by her two sons, on May 1, 2021. Tania will be remembered for her passion for her family and friends, unrelenting spirit, liberal instincts, and infectious laugh. Born on January 17, 1948 to Peter... View Obituary & Service Information

The family of Tania Marie Lui-Kwan created this Life Tributes page to make it easy to share your memories.