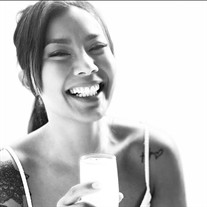 It is with deep sorrow that we announce the passing of Tiffany-Victoria (Taitano) Bilon Enriquez on January 19, 2020 in Honolulu, HI at the age of 38. Tiffany is survived by her Grandfather, Ismael Bilon (Norma) of San Antonio, TX; Grandmother, Aladina T. Cepeda of Killeen, TX; Father, Peter LG. Bilon (May) of San Diego, CA; Mother, Therese Rose Taitano of San Antonio, TX; Former Husband, John Andrew Enriquez of Ewa Beach, HI; Other half, Jonathan Daniel Baba of Honolulu, HI; Daughters, Teiya-Rose Delgado-Sandoval (Jostin) of San Antonio, TX, Jazmyn-Te’ana Enriquez, and Triniti-Noelle Enriquez of Ewa Beach, HI; Brothers, Paul-Nathan Bilon (Theresa) of Clarksville, TN and Mark-Jacob Bilon of Huntsville, AL (Nafrea Bree, Cara, Megan); Grandson, Matthew Alexander Delgado-Sandoval of San Antonio, TX, and numerous nieces, nephews, aunts, uncles, cousins, and extended family and friends. She is preceded in death by her grandfather Jose A. Cepeda, grandmother Barbara Leon Guerrero, and cousin Cheyenne Garza. Tiffany was born on October 5, 1981 in Augsberg, Germany to Peter LG. Bilon and Therese Rose Taitano. She graduated in 1999 from Simon Sanchez High School in Guam. Her law enforcement career began in Clarksville, TN as a Sheriff Deputy for the Montgomery County Sheriff's Office from 2007-2008 and 2009-2011. Her desire to serve and protect continued when she joined the Air Force Reserves in 2011 and the Hawaii Police Department in 2013. Fitness was a great passion of hers. As a bikini competitor for NPC, one of her biggest victories was placing 1st in her class at the 2017 Olympia Amateur in Las Vegas. Those who were touched by her will always remember her radiant smile, contagious laugh, and that spunky, sassy personality. Her legacy will stay alive through her family, friends, and anyone who’s life she inspired. A celebration of life will take place on Thursday, January 30th, 2020 Diamond Head Mortuary 535 18th Avenue, Honolulu, HI Public viewing from 8:30am - 10:00am, service to follow immediately after.

It is with deep sorrow that we announce the passing of Tiffany-Victoria (Taitano) Bilon Enriquez on January 19, 2020 in Honolulu, HI at the age of 38. Tiffany is survived by her Grandfather, Ismael Bilon (Norma) of San Antonio, TX; Grandmother,... View Obituary & Service Information

The family of Tiffany-Victoria Bilon Enriquez created this Life Tributes page to make it easy to share your memories.

It is with deep sorrow that we announce the passing of Tiffany-Victoria...