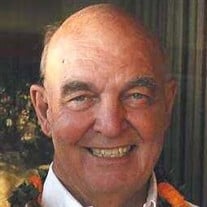 1933-2015 Wayne Charles Thiessen Wayne Charles Thiessen, 82, a man of Christian faith, passed away on Christmas Day, December 25, 2015 surrounded by his loving family. He was a 48-year Honolulu, Hawaii Kai resident. Wayne was an international businessman and entrepreneur. He was also involved in politics. In Virginia, he ran on the Republican ticket for Congress; and ran for the offices of State Senate, Governor, and U.S. Senate in Hawaii. He was a long time and active member of the Hawaii Republican party. Born in 1933, in Fairbanks, Alaska to Jack and Ellen Thiessen, Wayne was raised in small mining towns throughout the western United States. He spent his high school years in the California Sierra Nevada Mountains and was an avid outdoorsman. He was the eldest of five children and graduated from Nevada City High School where he was the student body president and played on the varsity football team with his brother Derek. Wayne initially attended University of Washington where he played varsity football. He later transferred to the University of Michigan, Ann Arbor and studied under a US Navy R.O.T.C. scholarship. He was a member of the Beta Theta Pi fraternity. He graduated in 1955 with two Bachelors of Science degrees in naval architecture/marine engineering and political science. It was at University of Michigan where he met the love of his life, Suzanne Reasoner, and they spent sixty wonderful years together. Upon graduation, he was commissioned as a U.S. Naval surface line officer. He and his wife Suzanne moved to Virginia for Wayne’s assignment aboard USS Cambria (APA-36) at the Norfolk Naval Base. After four years of service, he resigned from the Navy as a Lieutenant. Thereafter, he worked for the Newport News Shipbuilding & Dry Dock Company as an engineer from 1959 to 1967. He was on the engineering design teams for the world’s first nuclear-powered aircraft carrier the USS Enterprise (CVN-65) and the USS Robert E. Lee (SSBN-601) nuclear-powered submarine. During the Williamsburg, Virginia years, Suzanne and Wayne raised their growing family, developed an international art gallery business, and Wayne also was a candidate for U.S. Congress. In 1967, Wayne was recruited to work for an engineering contractor at the Pearl Harbor Naval Shipyard. He and his family left Virginia and put down roots in Hawaii. The Thiessens moved to Henry J. Kaiser’s new development in Hawaii Kai, one of the first young families to establish roots in the area in the 1960s. In 1970, he was appointed by the High Commissioner to the U.S. Interior Department Trust Territory – Micronesia to be Chief of Transportation for the years 1970-76. Moving his family to Micronesia, he began his service to the federal government. After spending many years in Micronesia, he became an entrepreneur and founded Transoceanic Navigation Company, Inc. (TONCO). TONCO shipped goods between the Micronesian islands. He expanded his business to Honolulu and also shipped goods from the West Coast throughout the Pacific and the Far East. Throughout his working career, he was also employed in Guam, Saudi Arabia, Washington, D.C., and the San Francisco Bay Area, but ultimately returned to Hawaii for semi-retirement. Wayne’s abiding motto was “Keep the Faith” - as he instilled optimism, hard-work, uplifting humanity, the joy of athletics, and adventure in his children. His love of adventure took him all over the world for work projects. He also enjoyed swimming the rivers of the Sierra Nevada, the Chesapeake Bay, Micronesian seas, and the Waikiki Rough Water Swim competition. He was dearly loved by his wife Suzanne and their children: Michelle Aschwald (Howard) of San Rafael, CA; Kimberlee Miller (Richard) of Honolulu; Bradford Thiessen (Becky) of Honolulu; Douglas Thiessen (Pauline) of Irvine, CA; Tamara Brown (Chris) of Fresno, CA. and Patricia Halvorsen (Kit) of Honolulu. He is also survived by 19 grandchildren and 7 great-grandchildren. He is fondly remembered by his sister Jacquelyn Tennis of Olivet, MI and his brothers Brian Thiessen of Alamo, CA and Craig Thiessen of Nevada City, CA – as well as many wonderful cousins, nephews, nieces, and in-laws. His brother Derek and parents preceded him in death. The family will hold memorial services in March on Good Friday at Punchbowl National Cemetery and the Outrigger Canoe Club. Charitable donations may be given to The Arcadia Foundation, 1434 Punahou Street, Honolulu, HI 96822, which funds programs for the Kilohana Senior Enrichment Center of Niu Valley, in Honolulu, Hawaii.

The family of Wayne C Thiessen created this Life Tributes page to make it easy to share your memories.