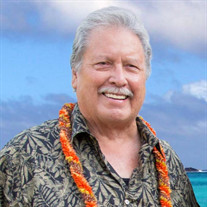 82, of Honolulu passed away at home on December 4, 2021. He was born in Honolulu on February 2, 1939 to Wendel David Bayne, Sr. and Annette Leialoha Petersen. The Kailua High School graduate, class of 1958, was a 3-sport athlete in football,... View Obituary & Service Information

The family of Wendel David Bayne Jr. created this Life Tributes page to make it easy to share your memories.