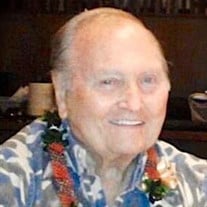 Willis Charles “Barney” Barnhouse 11/30/31-4/5/16 Barney- as he was fondly known- died peacefully at home, surrounded by his family and under the care of Hospice Hawaii. Willis was born and raised on a family farm outside of Olympia, WA during the height of the Great Depression, and was the youngest of three. His father, William Charles Barnhouse, was a one armed logger (he lost his right arm before Barney was born), an inventor/tinkerer, and farmer; his mother, Lucille Gause Barnhouse was school teacher; Lucille attended Bellingham Normal School (now Western Washington University) in the early 1920’s and taught in a two-room school house, where Barney attended until high school. Barney had a childhood we only read about now; being raised on a family farm wasn’t always easy, but he said that it helped define his work-ethic; from a young age, he woke early to milk the cows, gather eggs from the hen house, tend the crops, and do numerous other chores- all before the sun came up & often in cold rain, mud, and snow. Barney’s father spent weeks on end away from the family logging, so Barney assumed an ever greater responsibility from a young age. Away from the early morning chores, Willis developed his skills on the piano starting in the third grade. He loved music! Later in life, he also learned the clarinet and played in the high school marching band. Moving from his mother’s two room school house, Willis then attended Olympia High School, graduating in 1949 & was then accepted to to the University of Washington, where he joined the Delta Chi fraternity and was part of the Air Force ROTC. Like his father, Barney was resourceful; he often mentioned earning spending money by ironing fraternity brothers’ shirts or cooking them inexpensive steak dinners (which was actually horse meat!). After graduating from the UW School of Pharmacy, Willis entered the USAF & served in Germany- during the Korean conflict- as a communications officer. This was a particularly rich time in his life, when he made close friends, learned about other cultures and enjoyed his first international travels. Having been raised on a farm, Barney was in awe of his opportunities, and took full advantage of them. Being surrounded by both beauty and devastation, Barney developed a keen eye for photography and kept a wonderful visual record of his travels. Upon returning to Seattle, Willis got a job as a pharmacist at Magnolia Pharmacy. There Barney met the love of his life, Shirley Moulton (a customer), and they were engaged weeks later. They married on January 12, 1957 and lived in the Seattle area until 1976, when the family moved to Honolulu, HI. Barney was proud to call Oahu his home for nearly 40 years and immersed himself, and those around him, in many of the joys and aspects of the Hawaiian culture, including the respect for sovereignty, language, music, food, and love of ohana. Locally, he began as a pharmacist with Stewart’s Drugs, initially on Lewers Street in Waikiki, and ultimately at the store in Niu Valley. In 1981, he joined IPC and enjoyed working as a consultant pharmacist for many years. One of the jobs he held dearly was being the pharmacist for the Hansen’s Disease colony on Molokai, flying to Kalaupapa quarterly to bring medications to the residents. Aside from family and work, music was a constant in Barney’s life; from playing boogie-woogie on the piano, much to the chagrin of his mother, to taking his children to concerts like the ‘Stones, Joan Jet, or The Makaha Sons. Barney’s musical tastes varied widely, but his love for Hawaiian music was cemented in the 1970’s and grew stronger as time passed. In fact, while hanging out with Gabby Pahinui in the 1980’s, Barney was almost convinced to send his son to a boarding school on Maui- Lahaina Luna. Humor was another trait that helped define Barney’s life; he appreciated Monty Python, Rap Replinger, and George Carlin, among others. His dry sense of humor brought a levity to many aspects of his life. It lightened any work tensions and was a trait for which many will remember him fondly. Over the past 35 years, Barney and Shirley traveled extensively; they visited Europe multiple times, returning often to Germany. They also went to the South Pacific, Mexico, New Zealand, parts of Asia and Australia, and of course, explored much of the United States. They were on the original Board of Directors for Ronald McDonald House Hawaii and after retiring, Barney served as a volunteer weekly with Wai’alae Charter School in Kaimuki for 12 years. Barney was predeceased by his son Bret, his parents, and his sister Mary. He is survived by his wife Shirley, his daughter Kathryn (Scott Nurmi), his son Craig (Eve Youngdale), his sister Elizabeth and his grandchildren Kaela and Alex Nurmi. A memorial service will be held at 5pm Saturday April 16, 2016 at Maunalua Bay. Aloha/casual attire requested as this is an outdoors venue. A reception will follow at Kuapa Isle Clubhouse. In lieu of flowers, donations are suggested to Ronald McDonald House Hawaii.

Willis Charles &#8220;Barney&#8221; Barnhouse 11/30/31-4/5/16 Barney- as he was fondly known- died peacefully at home, surrounded by his family and under the care of Hospice Hawaii. Willis was born and raised on a family farm outside of Olympia,... View Obituary & Service Information

The family of Willis Charles "Barney" Barnhouse created this Life Tributes page to make it easy to share your memories.