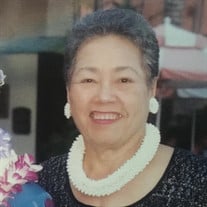 Winona "Tutu" Blanche Leialoha Kamai, 79, of Palolo, passed away peacefully on July 21, 2015. Born February 16, 1936 to Gilbert Stanley Nobrega and Mary Leialoha Kahoe in Honolulu. She graduated from the Sacred Hearts Academy class of 1954. Marrying the love of her life, Heine Ikaika Kamai on June 4, 1955 and together they raised their four D's, David, Dwynn, Dana and Devin. They have one granddaughter, Cheyane Haunani, who has always been the pride of their lives and apple of their eyes. Tutu was a Lifelong Member of 'Ahahui 'O Ka'ahumanu, Hale 'O Na Ali'i and the Waikiki Hawaiian Civic Club; she was also a member of Ewa Pu'uloa Hawaiian Civic Club; Nona served on the O'ahu District Council and the Association of Hawaiian Civic Clubs; she was a former board member of the CYO, Damien Museum and St. Patrick's Church where she was a member of their Pastoral Council, Finance Committee, Outreach Volunteer, a Eucharistic Minister as well as a Homebound Eucharistic Minister and an integral part of their RCIA Team; she was also a former Girl Scout Leader at St Patrick's School while her daughters were young. She worked at Catholic Social Services now called Catholic Charities and retired from Catholic Diocese of Hawaii after serving for 25 years. She had a great love for her family which also included a large "hanai" family and was very proud of her children and granddaughter. She is survived by sons, David Ikaika and Devin Iliki Kamai; daughters, Dwynn Leialoha and Dana "Kaleo" Kamai; granddaughter, Cheyane Haunani Kamai; sisters, Marilyn (George) Cabatic, Gilberta (Larry) Limasa, Myrna (Marshall) Colbert and Cherle (Kimo) Kaholokula; brothers, Herman Meyer and Archie Tanabe; hanai 'ohana, Liane Davidson, Paulette Kahana, Kaleo Akim Hanohano, Charmaine Silva, Julie-Beth Ako and Father Bob Stark; many nieces and nephews; preceded in death by husband, Heine Ikaika Kamai; sister, Nellie Tanabe and brother, Gilbert Nobrega. Services: Wednesday, August 12, 2015 @ Mary, Star of the Sea Church Visitation: 10:00 - 11:00a.m. Mass: 11:00a.m. Burial: 12:45p.m. @ Diamond Head Memorial Park Cemetery Attire: Aloha Flower and lei welcome. The Kamai 'Ohana wishes to thank each and every one of you for the love and friendship you have shared with our Mom throughout her lifetime. She cherished all of you.

The family of Winona "Tutu" Blanche Leialoha Kamai created this Life Tributes page to make it easy to share your memories.