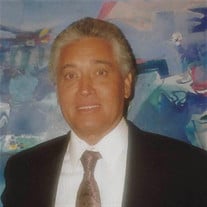 Allen Puamohala Perkins (Veteran of Navy and Air Force) Perk, age 84, passed away Monday March 10, 2020 in Honolulu. Born at the Nanakuli Homestead, he was predeceased by his parents- Arthur S. Perkins and Eva Jellings, brother Shannon and sisters Mahealani Perkins and Cynthia Kirby. After attending St. Louis School Class of ‘55 and Kaimuki High School, he joined the US Navy where he served on submarines. After that tour of service ended, he joined the US Air Force and was last stationed at Thule AFB in Greenland. Perk retired from GTE Hawaiian Telephone in 1993 with 34 years of service as the OTS Federal Systems Transmission Manager. He was also the owner and operator of one of the first health stores in Hawaii-The Central Diet and Health Foods on Bethel Street. Previous to his managerial position at GTE, he was a staunch labor leader and served as Business Agent for IBEW LU 1260 and President of LU 1357 during major telecommunication negotiations. Perk’s passions were golf, guitar playing, DIY projects and the Odd Fellows Lodge. He held several leadership positions in the 5 lodges but was proudest of being the Chairman of the Board for the Excelsior Lodge No. 1, the oldest benevolent society in Hawaii, established in 1846-174 years. He is survived by his wife, BettyAnn “keka”; 4 children-Allen “Skip” Jr. (Debby), Mahealani Perkins, Alana Dean (Eric), Cree-Shannon; 5 grandchildren-Jonathan, Kaipo, Kapono, Stephen, Tristan; 7 great grandchildren-Shiloh, Lowen, Jonalyn, Jamin, Jon Jr., Janoah, Sage. Also, his favorite-Aunty Nancy Suganuma. He was a true Crusader-lending a hand or an ear to anyone who approached him. Nothing was too difficult for him; he completed tasks where others failed. God bless, my Husband, keep their Dad and Grandpa safe. His difficult journey is finally over. Precious memories are ingrained in the ones he left behind. Private Service and Interment at Diamond Head Memorial Park. Memorial Mass Service to be announced at a later date.

The family of Allen Puamohala Perkins created this Life Tributes page to make it easy to share your memories.

(Veteran of Navy and Air Force)