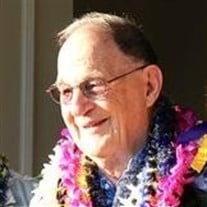 Charles “Bud” Scott, 88, a 64 year Hawaii resident peacefully passed away at his Kahala home on June 22, 2016. Bud was born and raised in the Seattle, WA area but moved to Honolulu in 1952 after marrying his college sweetheart, the former Geraldine (Gerre) Burke of Anacortes, WA. He joined the Punahou faculty where he served 36 years as a beloved teacher, coach, and athletic director. Many remember him for his humble and caring nature, and for his strong values and life lessons. Bud was a successful basketball coach at Punahou, Laupahoehoe and Hilo High Schools. After retiring from coaching in 1974, he became Associate Athletic Director at Punahou, and served his final year before retiring in 1991 as Athletic Director. Coach Scott’s basketball teams won two Hawaii High School Athletic Association (HHSAA) Boys Basketball State Championships and five state/territorial championship runner-up finishes for a total of seven state championship game appearances. At Punahou, his teams won five Interscholastic League of Honolulu (ILH) Championships and he also won a Big Island Interscholastic Federation (BIIF) league championship at Hilo High. His league record as a high school basketball coach was 163 wins and 29 losses for an 85% winning percentage placing first or second 15 times in 18 seasons, and no lower than tied for third in the expanded twelve team old ILH. His overall record, including state/territorial tournament play was 224 wins and 59 losses, nearly an 80% winning percentage. Coach Scott attributed much of his teams’ success to the many talented athletes who played with their hearts and valued teamwork and a strong work ethic. An athlete himself, Bud participated in collegiate baseball and basketball, and semi-pro baseball. He was the old Hawaii Major League batting champion in 1955 when he batted .425. He also was a founder and president of the Triple-A Pacific Coast League’s Hawaii Islander Booster Club and received the first ever National Interscholastic Athletic Administrators Association Hawaii State Award of Merit in recognition for outstanding leadership and meritorious achievement in interscholastic administration. Bud was also awarded the Ka’i ‘Alapa Award by the Punahou O’Men in 2014 for his significant contributions to the Punahou athletics program. Bud inspired many students in his seventh and eighth grade math classes introducing math logic, games and puzzles. He was a talented tap dancer, licensed real estate agent, enjoyed fishing and snorkeling, and he continued to play senior softball until he was 84. He attended Graceland College before receiving a bachelor’s degree at Western Washington University and a Master’s degree from University of Washington. Bud is survived by Gerre, his loving wife of 64 years, who supported him throughout his life and cared for him at home over the past five years. He is also survived by sons Kelly (Roshani) Scott and Kyle (Roxana) Scott, daughter Carolyn Scott (Jim) Peterson, six grandchildren, loving care givers, and his many students and athletes. Services will be held on Saturday, July 16, 2016 at 3:00 PM at Thurston Memorial Chapel at Punahou School. In lieu of flowers, please consider a donation to Punahou School in memory of Bud Scott.

Charles &#8220;Bud&#8221; Scott, 88, a 64 year Hawaii resident peacefully passed away at his Kahala home on June 22, 2016. Bud was born and raised in the Seattle, WA area but moved to Honolulu in 1952 after marrying his college sweetheart,... View Obituary & Service Information

The family of Charles "Bud" Scott created this Life Tributes page to make it easy to share your memories.