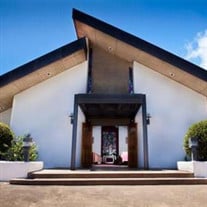 Felisa was born in Abulug, Cagayan, Philippines on January 14, 1930. She was one of 10 children born to Santos & Sebastiana Tamalia. Three (3) of her sisters died in infancy or in childhood. Three (3) of her brothers born before her (in succession) died in infancy. In 1960, when she was 30 years old, she and Regino Morales Castaneda were married. They both moved to Hawaii and started a family. Regi was born on July 21, 1962, Phidhel was born on October 29, 1963, Juliet was born on July 1, 1965 and Sandy was born on October 5, 1969. Felisa trained to become a barber like Regino. After a few years of doing that, she trained to become a seamstress and worked for companies that sold muumuus and swimwear for tourists. But what she really wanted to do was get a State job where she could earn a pension. After waiting patiently, she got a job as a custodian at the University of Hawaii where she eventually retired and got her pension. Felisa was fortunate to have done a lot of travelling. The first family trip was in 1970 back to the Philippines where the kids got to experience unmodernized living such as using an outhouse, bathing in a round steel tub in the front yard with a bucket, and going to the next town via a small boat. Future trips took the family to San Francisco and Los Angeles, but she also traveled with a group throughout the United States as well as The Holy Land. On February 1st 2004, Felisa sold her home in Hawaii and moved to Las Vegas along with her sister Esperanza and son Regi. She lived there until July 2012 then sold her house and moved to Winnetka, CA to live with her daughter Juliet, son-in-law Tim, grandson Jarrison and granddaughter Janae. On October 11, 2012, her first great-grandchild Naviah was born. She enjoyed every minute of every day as she got to watch Naviah grow up and become the apple of her eye. But in October of 2018, Naviah and her parents moved to Las Vegas. In addition to all the fun and excitement she experienced while travelling and with all the joys of gaining 10 grandchildren and 7 great grandchildren, she has also had her share of sorrow. Her husband Regino passed away on October 22, 1978 at the age of 71. Her older sister Esperanza Tamalia passed away on November 17, 2005 at the age of 86. Her oldest son Regi passed away on February 24, 2007 at the age of 45. Her daughter-in-law Amy passed away on April 2, 2016 at the age of 50 and her older brother Anacleto Tamalia passed away on July 12, 2020 at the age of 93. In November of 2019, Tim and Juliet sold their house in CA and moved to Las Vegas to escape the high costs of CA and to be closer to their grandchildren Naviah and new baby sister Hayden. Felisa couldn't have been any happier as she was greeted every morning by Naviah and Hayden. Unfortunately, in December of 2019, Felisa's declining health ended her up in the hospital where the doctors told her she had to start dialysis treatments. In addition to her dialysis treatments, she would be on home health care with Visiting Nurses of Nevada until she was admitted to hospice care with Centennial Hospice on July 5th 2021. On July 20th she was too weak to go to her dialysis treatment, so she never went back for any more treatments. Suprisingly, because she got to reserve more of her energy, she was able to enjoy her time with family when they visited. So on Saturday, July 24th we decided to have an impromptu lunch gathering and invited even more family members. We had over 20 people at our house and they all got to visit with mom and take pictures with her. Amazingly mom was aware and alert and enjoyed what would be her last day with her family. I guess she enjoyed herself so much that she decided she had lived a wonderful and fulfilling life and that it was time to go to her heavenly home. Thank you all making her life full of joy. We will miss her but we rejoice that she has finished the race and received her crown and basks in the glory of her heavenly Father. Hallelujah!

Felisa was born in Abulug, Cagayan, Philippines on January 14, 1930. She was one of 10 children born to Santos & Sebastiana Tamalia. Three (3) of her sisters died in infancy or in childhood. Three (3) of her brothers born before her (in succession)... View Obituary & Service Information

The family of Felisa Tamalia Castaneda created this Life Tributes page to make it easy to share your memories.

Felisa was born in Abulug, Cagayan, Philippines on January 14,...