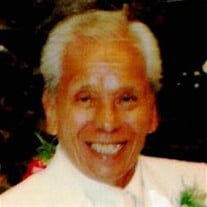 On Christmas Eve , December 24, 1922, in the town of Bacarra , Ilocos Norte , Philippines , MANUEL GALIZA VISAYA was born. He was the fourth child of six children. The oldest was his brother Doroteo, then his sister Maria (Corpuz), his brother... View Obituary & Service Information

The family of Manuel Galiza Visaya created this Life Tributes page to make it easy to share your memories.