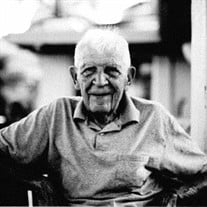 Klimenko, Michael, of Honolulu, passed away peacefully September 16th shortly after his 100th birthday. Preceded in death by his beloved wife and partner forever Marianna and parents Jacob and Tekla, brothers Paul and Andrei. Survived by children Andrew Klimenko (Raina), Markus Klimenko (Mary Karen), Anna Lanz (Kirk), and Martha Petrides (Jimmy); grandchildren, Aidan, Ted, Max, Maddie, Maia, Alex, Michael, Simon, Christopher, and Angelina. Born in the Russian Ukraine and taken as a POW during WWII, he remained in Germany after the war. Michael and Magdalena Zimmbauer accepted him into their home and later, their lives as “Mutti” and “Vati.” Marianna and Michael met on a train, and after a beautiful courtship wed in 1958 and later emigrated to the United States. They moved to Honolulu in 1968 and raised their children in Hawaii Kai. Michael taught Russian language and literature for 30 years and retired Emeritus from the University of Hawaii. He has published books in German, English and Russian. His last book, ‘Indelible Impressions, a Memoir’ was published earlier this year. Michael was frequently invited to speak on Russian history, literature and religious philosophy at universities and other institutions all over the world. Remaining active long after retirement, Michael spoke 7 languages, and loved to travel – especially with Marianna, he founded the Nemiroff Deep Philosophy Club of O’okala and enjoyed swimming, hiking and walking. Marianna and Michael were long-time members of Sts. Constantine and Helen Greek Orthodox Cathedral which recently honored him becoming a centenarian. The family requests in lieu of flowers, memorial contributions are made to Cure Alzheimer’s Fund, in honor of Marianna. Visitation at 10:30 a.m. Gathering and service at 11 a.m. Reception to follow on Wednesday September 25th at Sts. Constantine and Helen Greek Orthodox Cathedral. Private interment to follow.

The family of Michael Klimenko created this Life Tributes page to make it easy to share your memories.