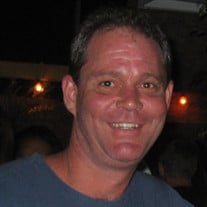 Michael Patrick Mullaney, 53, of Honolulu, Hawaii passed away on July 21, 2020 in Honolulu. Michael was born on October 5, 1966 in Park Ridge, Illinois. He was the third of four children born to Edward Patrick Mullaney and Dawn Marie (Fanter). Michael spent his childhood growing up in Tinley Park, Illinois where he and the neighborhood kids spent their days playing outside, riding bikes and big wheels, swimming and walking to the creek to catch frogs. One summer, Michael took a handful of sunflower seeds and grew gigantic sunflowers on the side of the garage. The sunflower became his symbol and conjures up an image of Michael’s boyhood face beaming triumphantly as he stands among flowers towering over him. Michael proudly served his country in the United States Army. Following his service, he lived and worked in San Diego, California, before settling in Honolulu, Hawaii. Michael was a building manager for two condominiums in Honolulu and took great pride in his work, as well as earning his Accredited Residential Manager (ARM) certification. Prior endeavors include owning a pool cleaning company and working as a fishmonger where he became an expert at cooking seafood. Michael loved planning and taking trips across Northern California in his camper. He found peace in fishing, kayaking, panning for gold and making every campfire bigger than the previous one. He enjoyed coin collecting, hiking, riding his bike around town, home renovation, working with his hands, and watching classic comedies and old movies. Michael’s big heart, infectious laugh, adventurous spirit, generosity and gentle soul will remain in our hearts and persevere in our memories of him. He anticipated the needs of those around him and often showed up before you even knew you needed him. Michael’s love for his family members and friends had deep roots and newly growing branches. He was overjoyed to have recently been reunited with his daughter, Leslie, and her family. Michael is survived by his parents, Edward and Dawn Mullaney; siblings, Kathleen (Ron) Koziara, Brian Mullaney, Kara (Michael) Bale; daughter, Leslie (Daniel) Dille; grandchildren, Bode and Cecilia Dille; aunt Linnea (Michael) Scearce; niece Amanda (Christine) Aune; nephews Riley and Liam Bale; and extended family and friends. A Celebration of Life memorial service will be held virtually with webcasting provided on Life Tributes. Please contact the immediate family for further information. http://webcast.funeralvue.com/events/viewer/34066

Michael Patrick Mullaney, 53, of Honolulu, Hawaii passed away on July 21, 2020 in Honolulu. Michael was born on October 5, 1966 in Park Ridge, Illinois. He was the third of four children born to Edward Patrick Mullaney and Dawn Marie (Fanter). Michael... View Obituary & Service Information

The family of Michael Mullaney created this Life Tributes page to make it easy to share your memories.