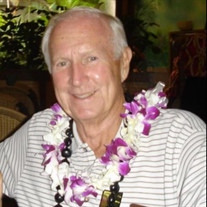 Ronald Dale Libkuman, most beloved Father, Grandfather, Great Grandfather, Uncle and friend passed away September 11, 2018. He leaves behind his daughter Linda Clark, son Michael Libkuman and son-in-law Tom Clark. He was an amazing Grandfather to Christina, Tom, Nichole, Brittney, Allison, and Heidi, and Great Grandfather to Matthew, Emmalynn, Tommy, Adeline, and Baby Rubin. Ron was born January 14, 1932 in Detroit, Michigan to Harold and Dena. He attended Redford High School where he played football and swam, Wayne College for undergraduate studies, and Detroit School of Law for his JD degree. Ron proudly served in the Air Force for 4 years and was stationed in Europe. He married his first wife, Joanne, in 1958 and together they moved to Hawaii in 1959 where they welcomed daughter Linda and two years later, in 1962, son Michael. In 1960 he began practicing law and in 1962 founded one of the most respected law firms in Hawaii, where Ron practiced for 45 years. The firm recently celebrated their 50-year anniversary. He married his second wife Val in 1977 and they were married until her passing in 2008. Early in 1970 Ron was approached by a friend who headed the rehabilitation medicine unit at Kapiolani Children’s hospital and asked for his help. Ron agreed, and before anyone knew it, Ron had turned the Children’s hospital into the Rehabilitation Hospital of the Pacific. In May of 1999, Ron served as a Kamehameha School Interim Trustee at perhaps one of the most crucial points in Kamehameha history. The interim trustees were credited with preserving Kamehameha’s tax-exempt status through closing an agreement with the IRS and established a new CEO based structure that initiated the strategic planning process to focus on education. Ron shared his love of travel and sailing with his children and grandchildren. His many sailing adventures included sailing with his two children to Alaska and Tahiti aboard his beloved boats Ho’oholo and Sunrise. Ron enjoyed woodworking and built almost all of the furniture in his home out of teak and koa wood. Of all the accomplishments Ron achieved in life, he was proudest of his close-knit family. Family was everything to Ron and he lived every day proving that. Whether it was swimming at Ala Moana beach park with his children and grandchildren, skiing in Lake Tahoe, or attending all the grandkids major events, spending time with family was always his priority. There are no words to describe the emptiness Ron’s passing leaves in our family. He was truly our north star, always there, always consistent and forever guiding us in the right direction. Ron will be fondly remembered as a family man, and as a well respected, loyal, honest, hardworking, generous and dedicated lawyer and friend. He was the best Father, Grandfather, Great Grandfather and friend anyone could have ever hoped to have and he will be deeply missed by all. A celebration of life will be held on Thursday, October 11th at the Diamond Head Mortuary Chapel. Visitation: 10 AM. Service: 11 AM. Aloha attire.

The family of Ronald Dale Libkuman created this Life Tributes page to make it easy to share your memories.