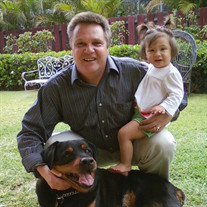 STEPHEN SCOTT FISCHER On a brisk February day in 1961 on Long Island, the 7th to be exact, Stephen Scott Fischer was born in Hempstead , following an older sister, Megan, and an older brother, Chris , into the Fischer family fold. He was then and always would remain the 'baby'. Five was a good round number for his parents Peter and Lucille. When he was just a tot the family moved to Smithtown near the far end of the island . Days were spent going to grammar school. playing with neighborhood kids and spending weekends in the company of loving grandparents, Peggy and Eddie. Then in 1970 Dad's work took the family to Southern California and it was time to start over. New schools, new friends and in the winter, new weather. A nearby municipal park sponsored sports leagues for all ages and Stephen participated in all of them, excelling along with brother Chris in basketball and flag football. The football must have been good training because when he entered Notre Dame High School, he made the varsity in record time. The sunny young boy with the perpetual smile was making his mark on the playing field. He was not, however, excelling in the classroom because, unknown to anyone including his parents, he was dyslectic as well as bi-polar and unable to understand why simple things like basic math and reading that came so easily to his classmates came hard to him. Frustrated, his life turned to a darker side and soon the drug culture of Southern California had him in its grip. A short stint in military school to get him away from his drug-using crowd did nothing to solve the problem and many months in the mountains of Guatemala with an organization designed to help teen addicts also had no lasting effect. He returned to the States and enlisted in the Army where he met and married Linda McGarry. From this union his son Peter was born. Following his discharge he returned to Southern California, taking on a variety of jobs looking for an outlet for his talents . He worked briefly on location in Texas as a crew member on a television movie being produced by his Dad with Mom on the scene as well. Close to family for several weeks, he seemed to thrive on the camaraderie and the hard work. But unfortunately a return to the environment in which he had first become addicted proved his undoing. Frustration with his lack of success led him to more self-medication and realizing he had to escape the dangerous situation he was enmeshed in, he moved to Hawaii to try to make a new start in life. Hawaii marked the beginning of his rebirth. He had known of Alcoholics Anonymous but it was not until he landed in Honolulu that he started to practice its precepts in earnest. He gave up drinking and drugs and dedicated himself to helping others find a path to sobriety. He became a selfless participant not only in Hawaii's AA community but also attended conventions where he was invariably asked to speak because if there was one talent Stephen had in abundance it was eloquence in front of a crowd. The city of Honolulu employed him briefly to teach English to ill-educated inmates as well as to bring those that needed the message of AA. When the city eliminated the position for budgetary reasons, he traveled with his mother to the Shrine at Lourdes where he rededicated himself to a higher power. At the time of his passing, he had been 15 years sober. Once dedicated to a sober life and given the gift of spirituality, he never slid back. Divorced and never remarried, he lived alone except for the times when he was joined by his son Peter who graduated from the neighboring high school. But when Peter returned to the mainland, Stephen was alone again with only his beloved dog Max for company. And then he met an attractive young Island girl and while they never married, out of their union was born a beautiful daughter, Eden. From the first day he was a loving and doting father, giving of himself and unselfishly making sure that his little girl got all the love he was able to provide. He did all of this in a body so wracked with pain that he often had to lie still on a hardwood floor for relief. He had crushed discs in his neck and in his lower back. Because he was a former addict he refused to take painkillers like morphine and demerol and without them, surgery was impossible. And so he suffered. On September 10, his suffering came to an end as God took him to a better place. He will be sorely missed by his family but also by the scores, perhaps hundreds, of addicts that he helped to fight their addiction and regain their lives. On behalf of them, we say Godspeed , Stephen. You have earned your final rest. Private Services will be held

STEPHEN SCOTT FISCHER On a brisk February day in 1961 on Long Island, the 7th to be exact, Stephen Scott Fischer was born in Hempstead , following an older sister, Megan, and an older brother, Chris , into the Fischer family fold.... View Obituary & Service Information

The family of Stephen Scott Fischer created this Life Tributes page to make it easy to share your memories.