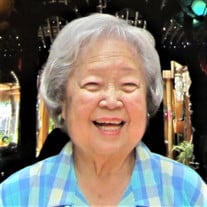 Violet Atsuko Okubo, 87, of Honolulu, passed away at home in the quiet afternoon of June 5, 2021. She was born in Honolulu on April 15, 1934 and was a graduate of Roosevelt High School. She grew up in Kapahulu with her younger brother Sonny, her parents, and grandparents and doggie Minnie. As a teenager, she loved music so much that her dad would drop her off at a record store where she would spend entire days listening to popular songs of the 40’s and 50’s. After graduation, Violet worked part-time for a seamstress shop. She eventually left the sewing business and was hired as a messenger for the law firm Smith, Wilde, Beebe and Cades, known today as Cades Schutte. In the days before today’s modern-day luxuries of riding a bicycle to deliver items and emailing became a reality, she wore dresses, blouses and skirts with fluffy crinoline petticoats and high heeled shoes and walked around downtown Honolulu to make deliveries. Violet left the messengering world and then became a PBX switchboard operator and then a receptionist. She loved her job and co-workers and worked for the firm for 32 years before retiring in 1994. Violet loved to travel in her retirement with her family. The family went on tours to the West Coast, East Coast, Great Lakes, and Japan. She also went to a University of Hawaii football road game once a season for several years, despite not being a football fan. She also loved going to the Sunday brunch buffet at Disney’s Aulani Resort and being cuddled by Mickey, Minnie, Goofy and the rest of their gang. Violet was preceded in death by her husband of 58 years, Philip T. Okubo. She is survived by her son, Alan M. Okubo; daughter, Sharon A. Okubo; sisters-in-law, Maxine Matsumori and Pearl Y. Ohashi, cousin Barbara S. Lee, nieces and nephews. Funeral services will be held on Saturday, August 7, 2021, at Diamond Head Mortuary, 535 18th Avenue. Public visitation 10:00 a.m to 10:30 a.m. Buddhist service 10:30 a.m. Additional public visitation 11:30 a.m. to 12:30 p.m. Casual attire.

Violet Atsuko Okubo, 87, of Honolulu, passed away at home in the quiet afternoon of June 5, 2021. She was born in Honolulu on April 15, 1934 and was a graduate of Roosevelt High School. She grew up in Kapahulu with her younger brother Sonny,... View Obituary & Service Information

The family of Violet Atsuko Okubo created this Life Tributes page to make it easy to share your memories.

Violet Atsuko Okubo, 87, of Honolulu, passed away at home in...